Demeyer holds a Doctorate of Musical Arts in Oboe Performance from the University of Southern California, and a Master’s and Music Education Degree from the Royal Conservatory of Brussels. Awards and recognitions include fellowships from the Fulbright Foundation, the King Baudouin Foundation and the Belgian American Educational Foundation, a First Prize at the Belfius Classics Music Competition, as well as multiple University of Southern California Chamber Music Awards and Awards for Outstanding Academic Achievements.

During the past decade, Demeyer has taught oboe, shawm, solfege, music theory and children’s choir at various music academies and conservatories both in the United States and Europe. Since 2014 she has been Lecturer in Baroque Oboe and Director of the Baroque Wind Band at the University of Southern California Thornton School of Music. Highlights of Demeyer’s career include founding the first official Renaissance shawm course in Belgium, researching and performing “forgotten” music of 20th-century Belgian composers, as well as projects on bridging the gap between European and American oboe schools. Her most recent endeavor is Baroque oboe building. 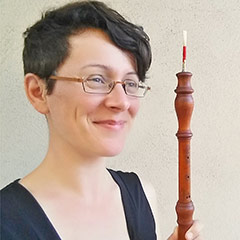