Maxine Eilander plays on a range of Baroque and classical harps. She has most recently started working on a project of harp and violin music by little known female composers of the Classical and Romantic periods with violinist Tekla Cunningham.

Born in The Netherlands, Maxine grew up in South Africa, where she earned her Bachelor of Music on the classical harp. Her special interest in early music led her to further study at the Hochschule für Kunste in Bremen, Germany, where she completed her post-graduate diploma in early harps and continuo (accompaniment) practice. She has appeared as a soloist with many leading ensembles including Tragicomedia and Tafelmusik, and regularly appears in the opera and chamber opera productions of the Boston Early Music Festival as well as being the harpist for Seattle’s Pacific MusicWorks. Maxine has performed at numerous opera houses and festivals including the Covent Garden Festival, Staatstheater Stuttgart and Netherlands Opera, playing continuo in productions of various baroque operas and chamber music. In 2012 Maxine was invited to perform Handel’s Harp Concerto at the World Harp Congress in Vancouver.

Recordings featuring Maxine as a soloist include Handel’s Harp, released on ATMA, with all of Handel’s obligato music written for the harp, including his famous harp concerto, which she has also recorded with Tafelmusik (A Baroque Feast, Analekta).

Maxine is adjunct instructor of historical harps at the USC Thornton School of Music.

She also teaches in her home studio in Santa Clarita, California, as well as online Zoom sessions.

Together, with Stephen Stubbs, she has begun publishing music through Proteamusic.com. Planned are volumes of music for solo voice from different countries, starting with “Selected Songs of the 17th Century, Volume 1: Italy,” available in December both in print and digital download, as well as pre-recorded accompaniments of the pieces.

“Symphony” from Handel’s Saul with Variation by Stephen Stubbs 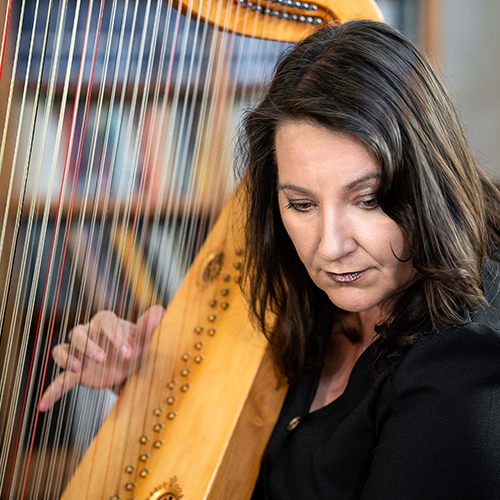