Since Dr. Molly Miller picked up a guitar at age seven, she’s been captivating audiences with her sophisticated and raw style. She’s one of Los Angeles’ most sought-after musicians, recording and touring with artists such as Jason Mraz, Black Eyed Peas, Donna Missal and Sin Bandera at venues like the Hollywood Bowl, Royal Albert Hall and Coachella. Miller heads her own trio, Molly Miller Trio, with legends Jennifer Condos and Jay Bellerose. Their music has been showcased on NPR’s Fresh Air,and their 2021 release, St. George, was featured in major media outlets such as Guitar Player, Fretboard Journal, Vintage Guitar and Gibson. Molly Miller Trio has toured opening for Jason Mraz and performed at iconic spaces such as Monterey Jazz Festival and SF Jazz. Miller is in the house band on ABC’s newest Bachelor-adjacent primetime show Listen To Your Heart. Soon after earning her doctoral degree in musical arts from the USC Thornton School of Music in 2016, she became the chair of the guitar department at Los Angeles College of Music, a position she still holds. 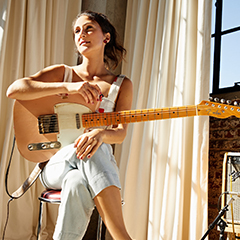