One Degree of Separation

Students and faculty listen to guitarist Julian Lage during a masterclass.

With its vast network, the USC Thornton faculty pulls together a who’s who of music professionals for online master classes.

These are just a few of the music industry professionals invited by USC Thornton faculty to give master classes in April. Tasked to come up with alternatives for cancelled concerts and rehearsals in the wake of COVID-19, the faculty assembled these guests within days of the announcement that the campus would close and all classes would move online.

The list of guest speakers reads like a who’s who of the profession. They include faculty, alumni, colleagues and other professionals. And they were all only a phone call away.

“These alumni are all people who are not household names in the traditional sense, but they are in their sectors of the music world,” Stoubis said. “These are students who graduated with Studio Guitar degrees, and it was wonderful for our students to see the professional outcomes that are possible with the education that they are receiving. It also revealed that there are a variety of different opportunities when you receive a world class education and apply it appropriately.” 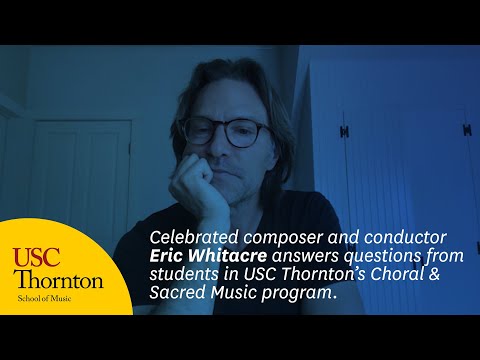 Students learned a lot about the business — and wanted more. They suggested some names. Stoubis asked student Dylan Gorenberg for help in reaching out on his behalf to the first four guitarists on the list, and they all got back to Stoubis within several hours and said yes.

One of them was Mark Lettieri of Snarky Puppy. He discussed a wide range of topics from improvisation to equipment to his creative process. Early on, Lettieri pointed out that he and Stoubis had a mutual friend by the name of Noel Johnston (BM ’95). Stoubis shared with the students that he and Johnston had been students together at USC.

“It gave me the idea that we are one degree away from anybody,” Stoubis said. “With our alumni network and our faculty, it is a quick jump to almost anyone in the music profession. There is only one degree of separation from our faculty, alumni and current students and many of the foremost guitarists and music professionals throughout the world.”

In many of the master classes, other faculty joined in and became a major part of the discussion. Lettieri said he learned a lot about rhythm by learning Paul Jackson Jr.’s guitar parts. Jazz guitarist Jonathan Kreisberg had an insightful exchange with Frank Potenza, and celebrated guitarist Julian Lage acknowledged Bruce Forman among the Zoom crowd of students and faculty. 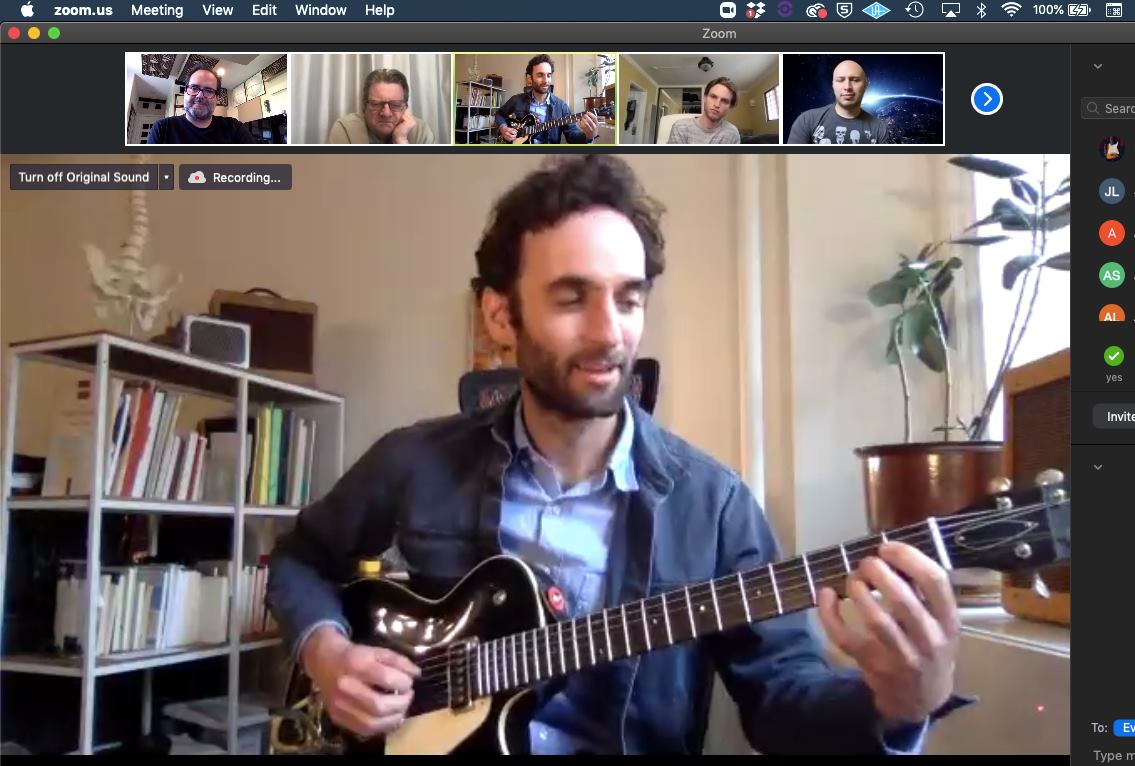 “Students recognized that these professionals are connected to their professors,” Stoubis said. “These kinds of connections are hard to earn, and they take sometimes decades to make them on their own. But being able to plug into an existing strong network of connections like this is one thing that differentiates Thornton from other schools.”

“The guest artists have been a real silver lining to this current situation,” said Master’s student Jeff Frantom. “I was able to ask Mark Lettieri about finding his voice as a composer, and his advice was to aim for an image or mood and just trust what comes out. It was reassuring to me — to not be overly critical of what I write.”

Students and faculty in the USC Thornton Orchestra Program were all set to perform Richard Strauss’ “Don Quixote” on March 13 as the opening concert of the Piatigorsky International Cello Festival when the news about sheltering in place came on March 11. “We were on such a high musical pinnacle. The Thornton Symphony musicians were so excited and ready to perform this great masterwork,” said Carl St.Clair, artistic leader and principal conductor of the USC Thornton Orchestras.

St.Clair and Sharon Lavery, resident conductor of the USC Thornton Symphony, Chamber Orchestra and Wind Ensemble, coordinated a master class series by looking at colleagues close to home. “Carl and I immediately looked at the great depth of our faculty,” said Lavery. Her first call was to Bob Reynolds, principal conductor of the Wind Ensemble, who she had heard give an outstanding lecture on getting an academic position years ago. “I knew that would have school-wide appeal.”

Emmanuel Rojas, a doctoral candidate studying trombone and conducting, attended a number of the sessions with faculty. “Advice from the guest artists illuminated the audition process in a new light,” he said. “Also the backstories of the guests who were asked how they got to where they are now was insightful, proving that there is no one path to get to your goal or even that plans in life change regardless of how you envision them to pan out.”

During two master classes, St.Clair took a deep dive into Strauss’ “Ein Heldenleben” and Shostakovich’s fifth symphony. “Carl’s sessions were invaluable,” Lavery said. “To go through a score with Carl in-depth like that is something you’re not going to find anywhere.”

“While these are not going to replace playing ‘Don Quixote’ or ‘Four Sea Interludes’ or playing with other musicians — because that’s what it’s all about — these are the kinds of things that we don’t often have the chance to talk about,” St.Clair added. “Maybe we will continue these discussions next year after we are back to some kind of normalcy.”

Something to Think About

Mike Scheibe, chair of Choral and Sacred Music, agreed the master classes are a rare opportunity. In addition to Thornton students and faculty, his classes have drawn colleagues nationwide.

“People have asked to join our Zoom talks,” he said. “These are topics that are not only important to our students but also to teachers across the country.”

“When I look at all of these presentations, the faculty of Thornton have really raised the bar,” he added. “I just hope that as we look forward, we take what we’ve learned in this period to influence the future of our teaching.” 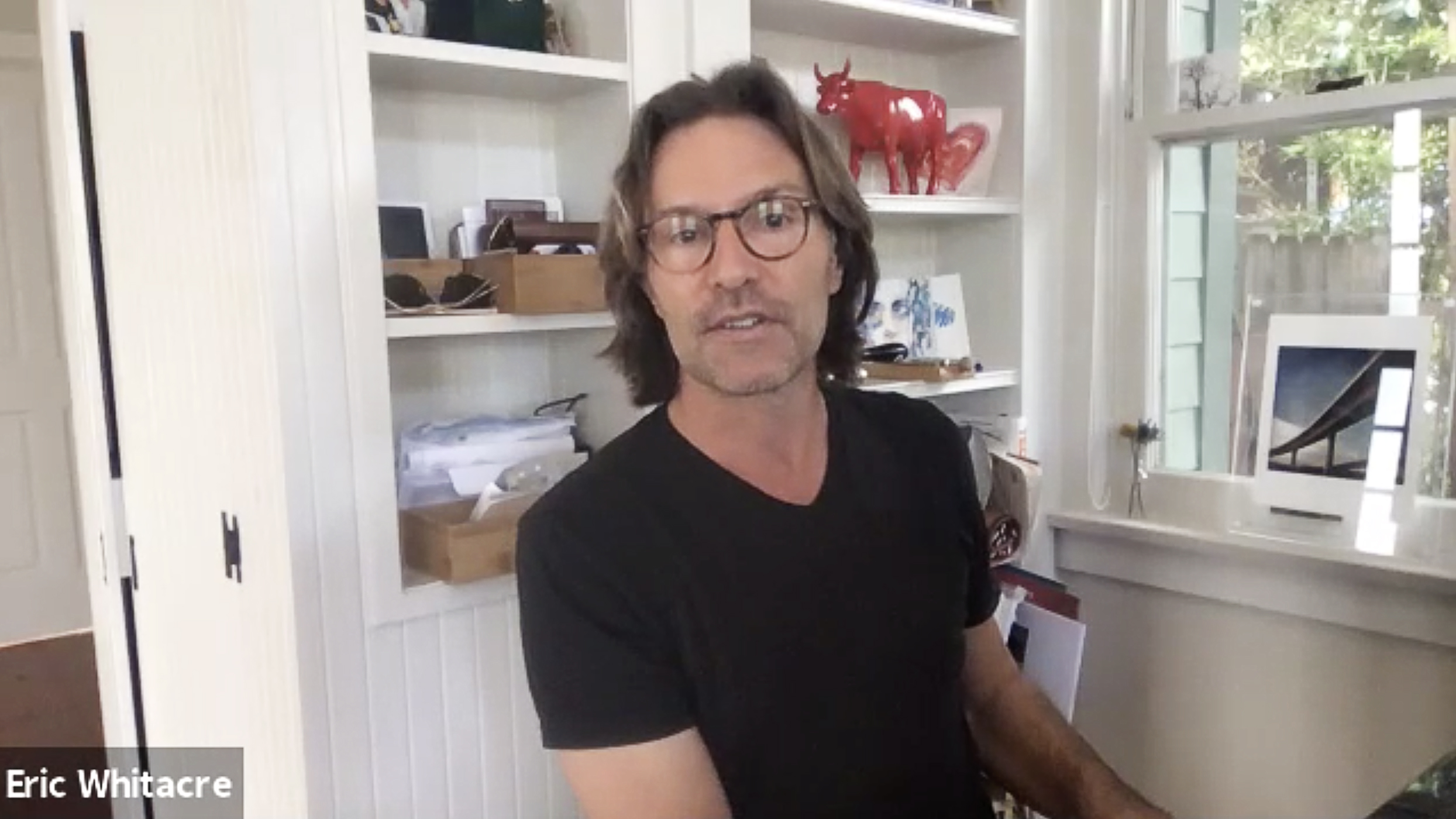 Composer and conductor Eric Whitacre spoke with students of the Choral & Sacred Music program about his creative process and career.

Scheibe pulled in colleagues and alumni in choral conducting to address topics related to intent, interpersonal skills and the environment. His first guest was GRAMMY Award-winning composer and conductor Eric Whitacre, who Scheibe has known since he was 19 and just beginning to compose choral music. Whitacre shared insights into working with professional choirs, including the Los Angeles Master Chorale where he was the Swan Family artist-in-residence in 2016, and his virtual choirs on YouTube.

“These discussions have given us time to rethink the fabric of our choral ensembles, time to think about the importance of the music we make and how we can reach out within and outside of our community,” Scheibe said of the master classes.

“I was particularly struck by the wisdom of Dr. James Jordan from Westminster Choir College,” said Master of Sacred Music student James Moursund. “He spoke honestly about how people heal from a crisis, and how the relationship we have to freedom is one that bears responsibility. It is clear that people will be changed after this experience, and may grow in unity, wisdom and compassion for one another.”

Jazz Studies faculty member Bob Mintzer reached out to musicians he has worked with who had something substantial to contribute to his students, including legendary saxophonist Bennie Maupin and longtime colleague Randy Brecker. “Randy is one of the most successful and influential trumpet players on the scene,” he said. “His diverse skills as a performer, composer and band leader really caught the students’ attention and further pointed out the skills required to thrive in the music scene today.”

Louis Cole (BM ’09) also immediately came to mind. He has built an amazing career since graduating from the Jazz Studies Program in 2009 and forming Knower, an internationally touring electronic funk-pop group with millions of online views of their videos inspired by ’80s videogames. “It was great for our freshmen in Elements to see living proof of a successful working musician from their generation,” Mintzer said, “and to see what the trajectory looked like from student life to the international music scene.”

Jazz Studies student Sebastian Sack enjoyed learning about Cole’s approach to composition. “Randy Brecker also inspired me to think about writing music differently when he talked about pulling inspiration from many influences and, with them, assembling something new,” he said. “It was fantastic to see these artists who have inspired us so much musically and get the chance to hear from them about their music and process.”

Hearing successful, creative musicians’ stories about how they developed as artists and businessmen in the music scene was revealing, Mintzer said. “It inspired all the students and gave them hope that there will be a place for them in the scene if they work hard for it.”

Jazz Studies student Dario Bizio was especially inspired by hearing Maupin and Brecker’s experiences in New York’s jazz scene “back in the day.” “During these conversations, it occurred to me how lucky we all were to be able to listen to these people who were literally creating the music we all listen to and love so much,” he said. “Their stories left us all inspired and thankful for this amazing experience.”

Read more about how USC Thornton faculty have adapted to remote teaching.