Saturday, May 21, Classical KUSC producer and well-known radio personality Gail Eichenthal will host a panel entitled Remembering Piatigorsky at the Piatigorsky International Cello Festival. At the free event, several of Gregor Piatigorsky’s former students, including Laurence Lesser, Mischa Maisky, Jeffrey Solow, and Raphael Wallfisch, will reminisce about their mentor and share archival images and video clips from the cellist’s life.

Gregor Piatigorsky had no small influence on the cultural life of Los Angeles. The following history of the cellist’s life and work in the city is drawn from an article in the Piatigorsky International Cello Festival program book, written by recent USC Thornton Musicology alum Keenan Reesor (MM ’10, DMA ’16) “Piatigorsky comes to Los Angeles”), with images and assistance from the Piatigorsky Archives at the Colburn School. 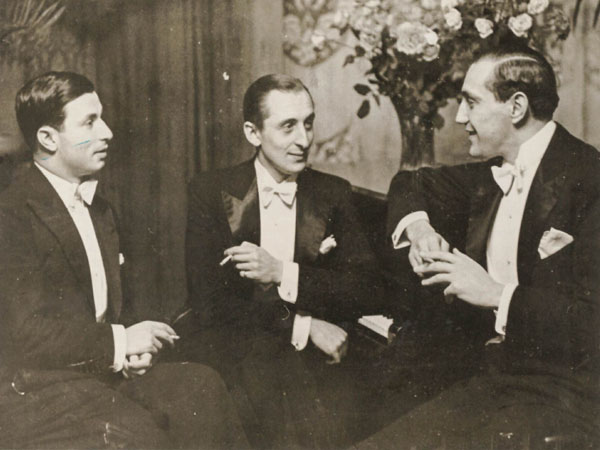 Piatigorsky’s success as a performer was only the beginning of a relationship with Los Angeles that grew deeper and more multifaceted as time went on. While its distance from such centers on the East Coast and in Europe was keenly felt, Los Angeles had an eager and increasingly well-funded audience for classical music. After his first performance, the Los Angeles Times named him as one of “three young Russian geniuses” whose performances had contributed to a “renaissance” of musical interest in Los Angeles, and in his second season, critic Edwin Schallert called Piatigorsky’s performance epoch-making.

“As far as cellists are concerned,” Schallert wrote, “this may be termed the Piatigorsky era. Piatigorsky has both rare nuance and singular depth, and he is technically remarkable.”

Piatigorsky’s journey to Los Angeles began with a dramatic sequence of events that entailed trudging across the Polish border with cello in hand in 1921, escaping police custody and deportation, and playing for food. By the early 1940’s, Piatigorsky had taken out naturalization papers and settled in Connecticut with his family. “I do not like to be called the young Russian cellist any more,” he told the Times in 1941. “. . . Please, if you speak of me, call me the ‘veteran American cellist.’ I like that much better. It makes me feel so proud!”

In 1949, Piatigorsky, now an American citizen, bought a home in the Westside Los Angeles suburb of Brentwood, where he would live for the rest of his life. Though originally a political refugee of the Soviet Union, his international success—to say nothing of his marriage to a Rothschild—placed him in a different social milieu than the broader émigré community in Los Angeles, which included numerous eminent European creative artists. 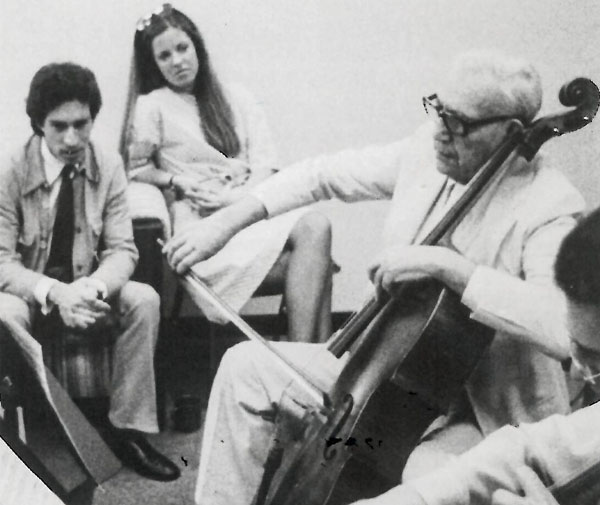 Like his neighbors Heifetz and Arthur Rubinstein, Piatigorsky made occasional appearances on film during this time, including the 1947 musical drama Carnegie Hall, and put his fame to local use. When financial distress threatened the existence of the Hollywood Bowl, Piatigorsky and conductor Alfred Wallenstein donated their services, and critic Albert Goldberg praised the newly unamplified venue, which “contributed an infinitely greater degree of intimacy and contact with the audience than was ever possible, and the result was an interpretation [of the Dvořák concerto] of uncommon eloquence.”

By the mid-1950s, Piatigorsky’s artistry had begun to assume civic importance. To his regular performances were added those at public events, such as the memorial service for Albert Einstein held at UCLA in May 1955. Piatigorsky began cultivate local musical talent by judging competitions, supporting the Los Angeles Junior Philharmonic, serving as president of the Young Musicians Foundation and more. Ready to devote a significant portion of his time and energy to regular teaching—which he considered it an integral part of his personal and artistic development—he joined the faculty at the University of Southern California in 1962.

What mattered most to him as a teacher was “how [his students] will use their art as human beings in a productive life,” and he considered it his duty as a teacher to be “a good man.” He said, “Without goodness, one cannot be right in any walk of life.” Piatigorsky’s commitment to his students remained utterly undiminished as his health gradually declined. “To his students he gave all of himself,” recalled his wife, Jacqueline. “When they came early in the morning I asked, ‘Will they be here for lunch?’ ‘No,’ he said. But they were still there for dinner.”

Piatigorsky died of cancer in his home on August 6, 1976. Piatigorsky belonged to the world, but no single place in the world has greater claim on him than Los Angeles.

Keenan Reesor’s complete article on Gregor Piatigorsky’s legacy in Los Angeles can be read in the official program of the Piatigorsky International Cello Festival, which is available for purchase at Festival events.