Richard Smith’s  thirteen solo recordings have established him as a veteran of the contemporary music world – with critical success on every one of his releases. His albums have garnished praise such as “Best Contemporary Jazz Guitar Album” (Tune Up Magazine), a nomination for “Record of the Year” (Ad Lib Magazine), and “Best New Artist” (Radio & Records Magazine). His album ‘SOuLIDIFIED’ spent 17 weeks in the top 10 for radio airplay of American contemporary jazz radio (Radio and Records Magazine) and 3 weeks at number 1 in the World for satellite and cable airplay (Music Choice).

In Europe, Richard has performed master classes at the Institute of Contemporary Music Performance, London, The Academy of Contemporary Music, Guildford, The Leeds College of Music, The London College of Contemporary Music, the Academy of Popular Culture, Leeuwarden, Holland, The Rotterdam Conservatorium, The Utrecht Conservatorium, The Royal Academy of Music, Denmark, Music Academy 2000, Bologna, The Universtate d’Rome, Ionian University, Greece, The ESC Guitar Seminar, Siracusa and many more. In 2012, he spent a semester as visiting professor at Agder University, Norway. He is co-director of ACI – The Aegean Cultural Initiative, headquartered in Paros, Greece, and has on-going relationships with schools in Australia, Malaysia, Norway, England, Italy and Argentina. 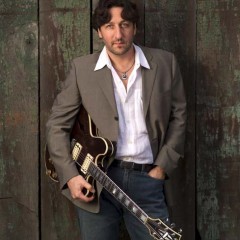