Woods, the recipient of the 2022 Chamber Music America Michael Jaffee Visionary Award hailed by The Guardian as “a cellist of power and grace” who possesses “mature artistry and willingness to go to the brink,” has established a reputation as a versatile artist straddling several genres. In addition to solo performances, he has appeared with the Ictus Ensemble (Brussels, BE), Ensemble L’Arsenale (IT), zone Experimental (CH), Basel Sinfonietta (CH), Ensemble LPR, Orchestra of St. Luke’s, and the Atlanta and Seattle symphonies.

His debut solo album, asinglewordisnotenough (Confront Recordings-London), has garnered great acclaim since its release in November 2016 and has been profiled in the New York Times, the Chicago Tribune, the Los Angeles Times, The Guardian, 5against4, I Care If You Listen, Musical America, Seattle Times and Strings Magazine, among other publications. 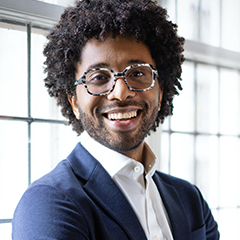