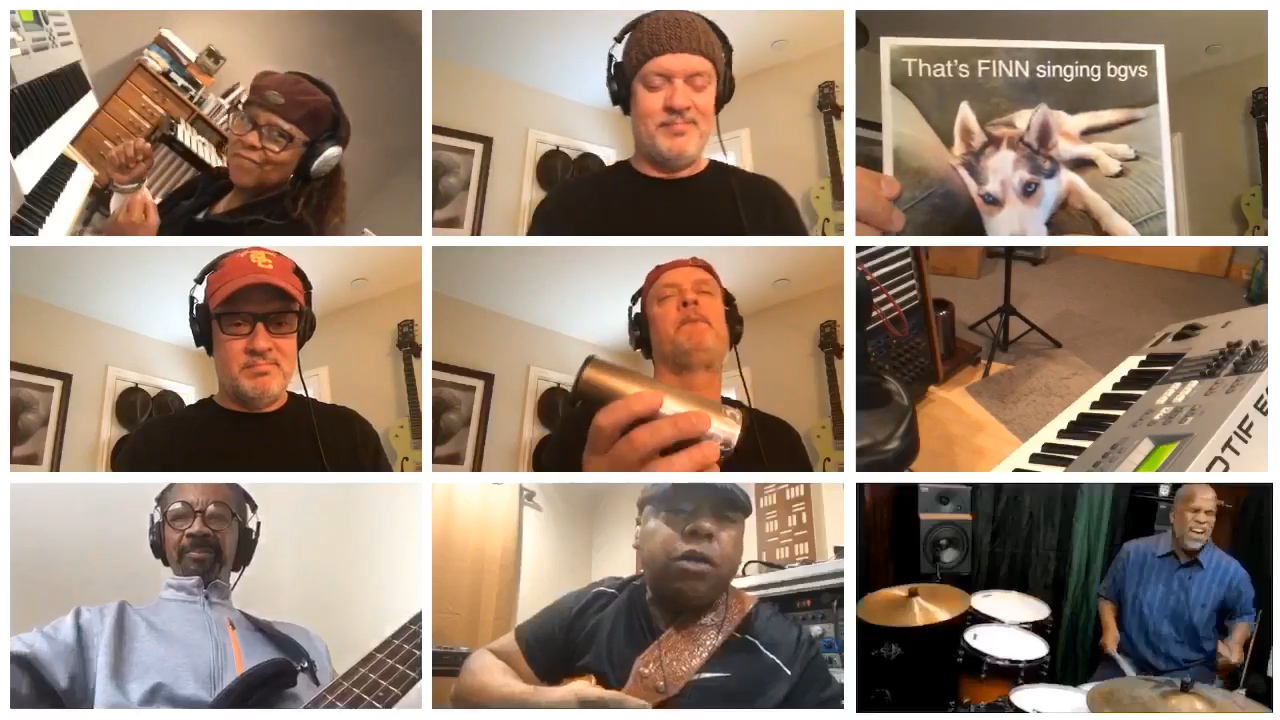 Faculty in the Popular Music program perform together in online video to lift up their students – and themselves.

After USC Thornton School of Music students and professors isolated at home in mid-March, classes moved online as lectures and private music instruction continued. But what about ensemble playing, the backbone of the school, and, in particular, USC Thornton’s 10-year-old Popular Music program? How could bands still perform together?

Popular Music program Director Patrice Rushen and four of her faculty members just showed their students – and a growing digital fan base – how it’s done. In a tribute to the late Bill Withers, the five of them used an iPhone app to collaborate remotely on a lesser-known Withers’ song, “Kissing My Love,” that they posted to Instagram. In just two days, with no promotion, it has prompted an avalanche of positive comments. “This is some Grade A, Unadulterated, Quarantined, Stinky, Hat-Wearin’ Professor FUNK Right Here!!!!” was one accurate appraisal. 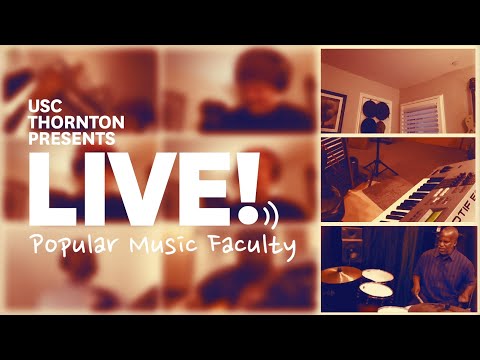 Rushen said making the video was an effort to lift up their students – and themselves. “After things kind of settled in as to what we were going to do about our students, we found ourselves at a loss about what we were going to do about ourselves,” she said. “All our other things we do, our gigs, had been cancelled or postponed. And we needed to play, especially because we were seeing our friends, our peers, people we really respected, falling ill or passing away.”

Withers, who died March 30, was a guest several years ago at the program’s weekly Popular Music Forum, where music industry luminaries speak candidly to students and answer questions. At Withers’ talk, students began a tradition of playing a few of the guest’s songs in his or her honor. Said Rushen: “It lets people who have become successful know that what they have done has become a course of study for us to examine the songwriting style, the lyrics, the music.”

Rushen, a celebrated pianist, musical director, and artist, and Paul Jackson, Jr., a longtime colleague and one of the most recorded guitarists in popular music history, had both worked with Withers professionally. Having Popular Music program professors as collaborators with industry icons is not at all unusual, said Sean Holt, a professor in the program who did the vocals on the video. “I have to walk around pinching myself daily at school because I am surrounded by titans of popular music,” he said. “If you look up any of the professors’ resumes – it’s a Who’s Who of music. It’s usually easier to name who they haven’t worked with than who they have.”

It took only about a week to create the video, despite the teachers’ still-full class schedules. A chart was sent to the five participants, who each recorded their part at their homes on iPhones using the Acapella app, the same technology that students in performance classes were asked to use during the shutdown. “There were some eye rolls because Acapella had been out there a while and students didn’t associate it with industry-level standard,” said Holt. “We had to remind them that we weren’t trying to create Pro Tool records, we were simply trying to see them play a song start to finish, albeit a virtual one that can happen at the same time.” After one onboarding session, students quickly figured out how to make the app work, and really impressed the faculty at the level at which they operated, said Holt.

The Bill Withers tribute video began with percussion professor Will Kennedy laying down a drum groove. He texted that to Paul Jackson, Jr., who added guitar. It next went to Alphonso Johnson, who teaches bass guitar, to add the bass lines. Rushen got the file next, adding keyboards. Finally Holt added vocals and a shaker. There were also some unplanned background vocals from Johnson’s dog, Finn, who gets his credit and a photo on one of the video tiles.

“This video represents the idea that as practitioners, professors haven’t lost touch with what it really means to be an artist and a musician,” said Rushen. She also noted that remote musical collaboration was expanding even before the pandemic. “People are using technology to send stuff back and forth to be able to have access to people they wouldn’t have if they were totally dependent upon having to be in the same place at the same time.”

“No one can play any part without knowing the entire song, without knowing what everybody else is playing – and then they have to get a good performance,” she said. Since the Acapella app doesn’t allow you to redo small bits, it’s more like a performance. “If you’re on the stage performing, you don’t get a do-over. You start and you finish,” Rushen said. “So, this checks that performance box.”

The Bill Withers Instagram video is not USC Thornton’s only virtual performance platform during the sequester. A YouTube channel, Live! From Somewhere, has 11 videos from current students and alums playing in various genres from classical to jazz to rock. A Popular Music program senior, Tehillah Alphonso, has a video singing multiple vocal harmony parts for the song “Give You Blue.” 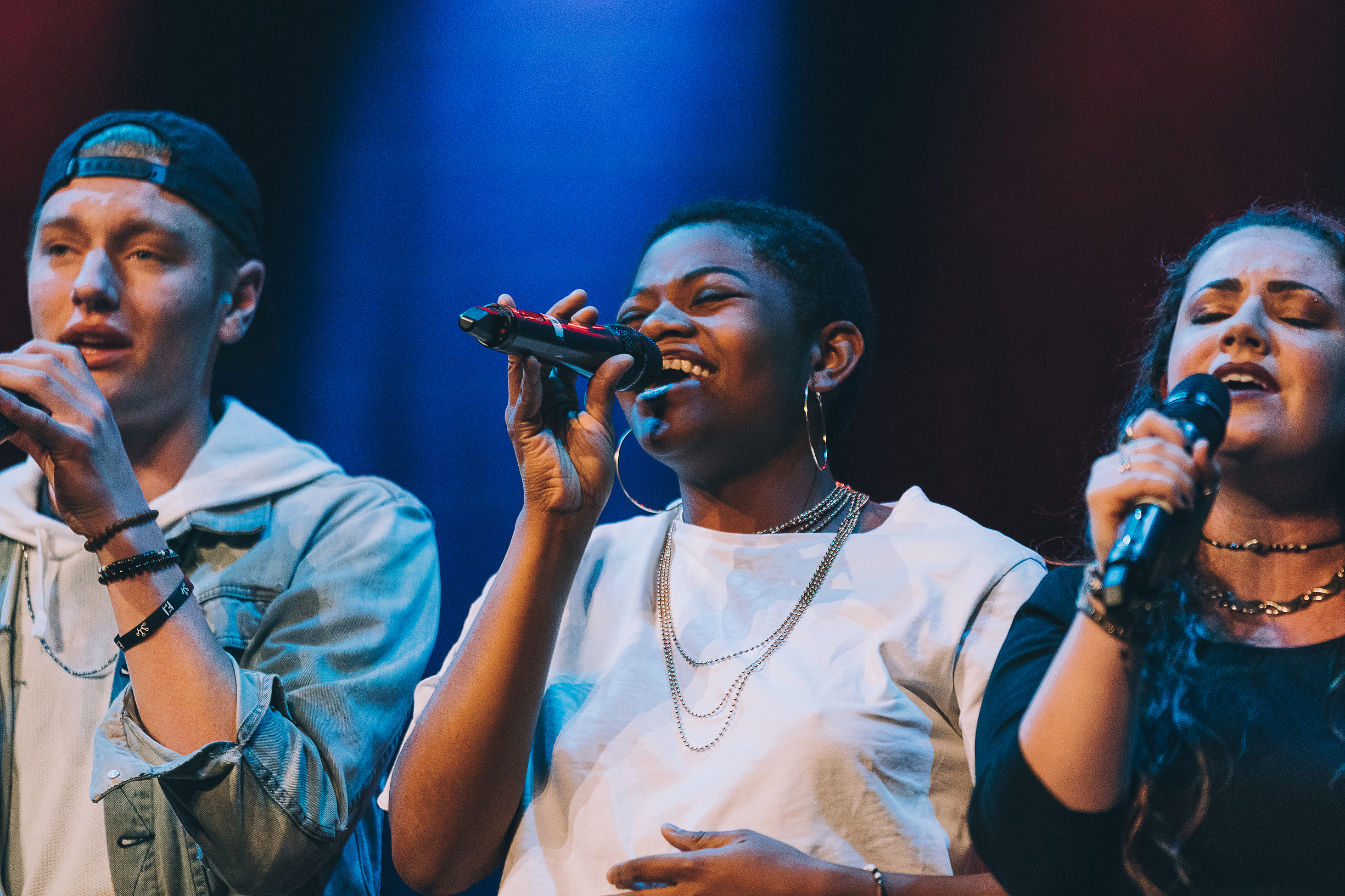 Tehillah Alphonso, a senior in the Popular Music program, performs with USC a capella group The SoCal VoCals at the International Championship of Collegiate A Cappella. (Photo courtesy of Alphonso)

“Tehillah came into the program with a vocal emphasis, but she is a golden example of somebody being exposed to all the other areas of music-making in our program,” said Rushen.

Could there be a silver lining to this sequestered creativity? Holt thinks there is for the faculty video makers. “Working together became possible in a way that maybe it was not going to if we all hadn’t been sent home,” he observed. “This has caused some of us to take a beat and do things that we might have put off.”