What was one of your favorite USC Thornton experiences?

In March 2019, I had the opportunity to serve as the background vocal section leader and perform in a tribute to Aretha Franklin for the USC Trustees, entirely arranged and music directed by the legendary Patrice Rushen. It was 30 straight minutes of the most powerful music I’ve ever heard dedicated to the Queen of Soul herself, and I got to do so while being completely surrounded by some of the best musicians I have ever had the pleasure of meeting. To say it was an out-of-body experience and one of the best performances I have ever been a part of in my life would be an understatement.

What is your favorite thing about Los Angeles?

My favorite thing about Los Angeles is the cultural diversity that I am being exposed to. I grew up in a small, fairly racially homogenous community in Nebraska, so coming out to Los Angeles to go to college was an adventure in itself. But I am surrounded by so many people from so many different backgrounds, from whom I learn something new every day.

I wish I had more knowledge of the professors at the colleges to which I applied. When doing research for music schools, I focused most on the prestige of the schools and what current students and alumni in the music industry were doing. However, I wish that I had done more research on the people who were teaching at these schools and their backgrounds. Some of the professors in Thornton are some of the most widely known musicians in the industry, past and present, and I truly had no idea until I got here and found out for myself!

What was your favorite thing about being a student at USC Thornton?

My favorite thing about being a student at the Thornton School is the opportunities that come about, simply for being associated with Thornton and, even more broadly, USC. Just for having the name of the school in my résumé, I have gotten surreal television, film, and music opportunities. Even more so, the Popular Music Program is structured in such a way that you easily get out of it what you put into it. Because my professors have noticed my hard work in my performance classes, I have gotten the opportunity to work with and perform for some legends in the music industry, and I know that there are many opportunities still to come.

Why did you choose USC Thornton?

I chose to attend USC Thornton for a number of reasons. Being from Omaha, Nebraska, and no longer wanting to go through four different seasons in a matter of days, the consistent sunny days of Southern California was the first thing that attracted me. However, what really pulled me in, aside from the prestige of the school, was that the Thornton School is based in the music center of the world. Los Angeles is the place everyone wants to be to pursue a full-time music career and what better way to get my foot in the door than to be recognized as a student in the Thornton School of Music? 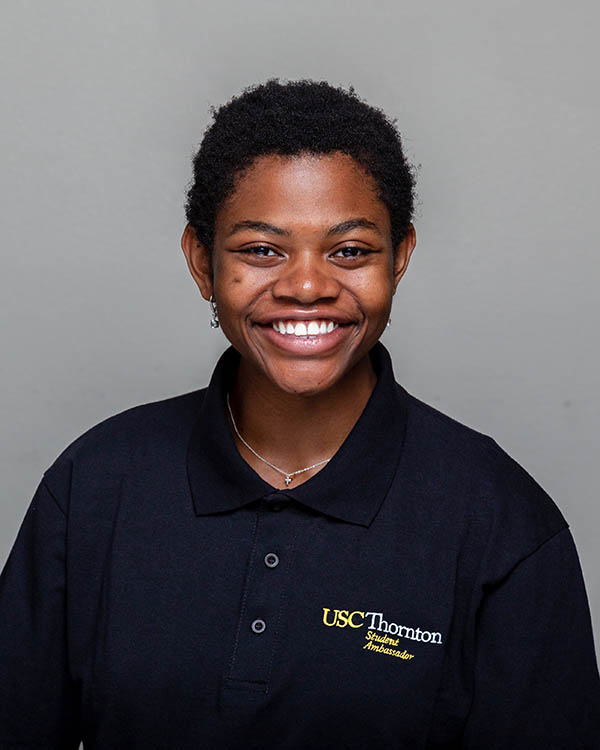