Terry Cravens, bass trombonist and professor of the USC Thornton Winds and Percussion department for 42 years, earned performance degrees from the University of Louisville, the Academy of Music in Vienna, and in 1972 completed doctoral studies at the University of Southern California.

Cravens played over two hundred performances of the Phantom of the Opera musical at the Ahmanson Theater in Los Angeles. He has played with the Los Angeles Philharmonic under such notable conductors as Zubin Mehta, Carlos Maria Giulini, Erich Leinsdorf, Pierre Boulez, Andre Previn, Witold Lutoslawski, and Esa-Pekka Salonen. In May of 1991, he toured with the Los Angeles Philharmonic through Scotland, England, and Germany under the leadership of Kurt Sanderling.

His background also includes 22 first edition records with the Louisville Orchestra under Robert Whitney and recordings of Wagner’s Die Walkure and Bruckner’s Seventh Symphony with Georg Solti and the Vienna Philharmonic. Additionally, he can be heard on a recording of the Requiem by Mozart conducted by Istvan Kertesz, also with the Vienna Philharmonic (1965). During 1969, Cravens recorded several albums with the Los Angeles Brass Society conducted by Lester Remsen and in 1977 played on a direct disc Wagner album with Erich Leinsdorf and the Los Angeles Philharmonic.

He has worked in every major studio in Los Angeles and can be heard in the music accompanying the “Tiny Toons” cartoon series. Dream Team, Battlestar Galactica, Cross Creek, Unfaithfully Yours, 2010, A Space Odyssey, Bound for Justice, Rocky V, and Rainman are a few examples of his work in film music.

Cravens was a faculty member at the University of Texas at Austin from 1972-1976. From 1976 to the present he has been Professor of Trombone at the USC Thornton School of Music. In 2006, he was the recipient of the Ramo Music Faculty Award for outstanding teaching. In 2009, he was awarded the Distinguished Alumnus Award from the University of Louisville School of Music and was made an Alumni Faculty Fellow by this same University in 2011. 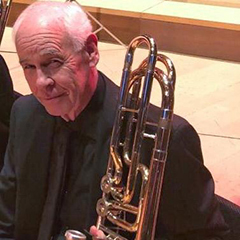