The Helios Guitar Quartet is no ordinary guitar ensemble.

For starters, the group, consisting of award-winning musicians and USC Thornton alumni Jack Cimo, Albert Diaz, Michael Kudirka and Adam Pettit, is separated by hundreds of miles. Cimo is a Chicago-based performer, Diaz a current graduate student at U.C.L.A., Kudirka a full-time Assistant Professor of Guitar at the North Carolina School of the Arts, and Pettit a faculty member of the Pasadena Conservatory of Music.

While the guitarists are all, at present, involved with professional commitments across the country, their collaborative work and prowess as an ensemble was made apparent by their release of Bach: The Well-Tempered Clavier, Book I, released last summer.

Beginning in 2008 with the seedling of Michael Kudirka’s arrangement of Johann Sebastian Bach’s monumental collection, the quartet has since recorded, edited, and mastered the finished product of “countless hours” of work and dedication.

If the task of recording a rendition of Bach’s original collection of solo keyboard music seemed daunting—and more than a bit ill-fitting—for a guitar quartet, ingenuity on the part of the musicians is what helped to bridge the gap between the two starkly different instrumental sounds.

Drawing inspiration from the string quartet tradition, the Helios Guitar Quartet used “a variety of differently pitched instruments to extend the range of the ensemble,” which involved fashioning two uniquely capable guitars for their performance.

“By including two unusual guitars, one a seven-string guitar allowing for lower bass notes, as well as a ‘soprano’ guitar, restrung so as to give notes in a much higher register, “the ensemble was able to “explore distant extremes of pitch far beyond the scope of ordinary guitars.”

What followed was the discovery of the depth and nuances of Bach’s original book of preludes and fugues, a feat that Diaz describes as a “major undertaking” for the quartet.

“After two years of editing over 100 hours of material and coordinating group decisions cross-country, we are proud to finally release Bach’s masterpiece, heard for the first time in its entirety on guitar quartet,” Pettit remarked.

Michael Kudirka echoed the sentiments concerning the sheer amount of effort Helios directed towards this project.

“The recording…represents our very best efforts to render these works in all their contrapuntal splendor.”

While the project is the culmination of the four guitarists’ apparent talent blending together in a truly remarkable way, Jack Cimo credits USC Thornton for encouraging the unlikely quartet to come about.

“Thornton highly encouraged projects like [ours] in which students across class year and in different majors collaborated,” Cimo remarked.

A school known for its encouragement and support for talent of all kinds, USC Thornton helped to facilitate and provide the needed assistance for the burgeoning guitarists.

“Being a part of the community at the Thornton School of Music meant that [we] could seek support and guidance from the Faculty,” said Diaz. “We are all so very thankful.”

In describing what the CD release meant to the group, Cimo touched on the notion of using the guitar to recreate the composer’s original music—the majority of which was never originally intended to be played as such.

“It was an exceptional privilege to play some of the western world’s most expertly crafted music,” Cimo said. “It was especially satisfying because most of the great composers wrote little to nothing for the guitar.”

And their inventive approach to a classic style hasn’t gone unnoticed or unappreciated.

“When we used to perform Book I in its entirety, we were always surprised when we got this question,” remarked Diaz, regarding audience anticipation for the release of a second book. “The concerts were 3+ hours long and people were asking for more Bach!”

Though the members of the Helios Guitar Quartet are all currently situated in various regions of the U.S., the four talents remain optimistic about recording a potential Book II, as a follow-up to the well-regarded first .

“We would be open to such a project if we found ourselves in Los Angeles again at some point in the future.” 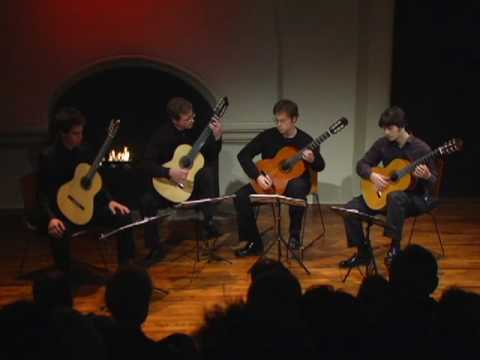 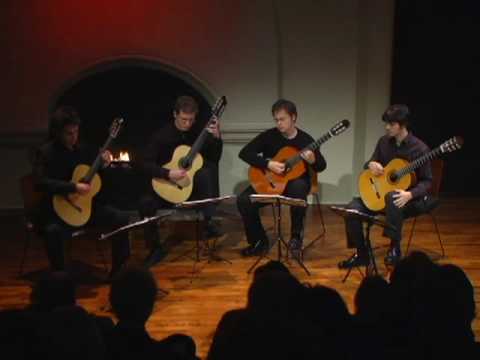 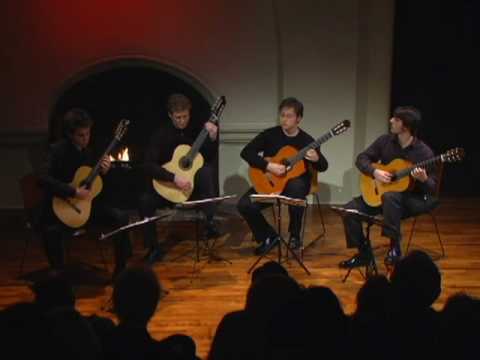 Drawing inspiration from the string quartet tradition, the Helios Guitar Quartet used a variety of differently pitched instruments to extend the range of the guitar ensemble, which involved fashioning two uniquely capable guitars for their performance.