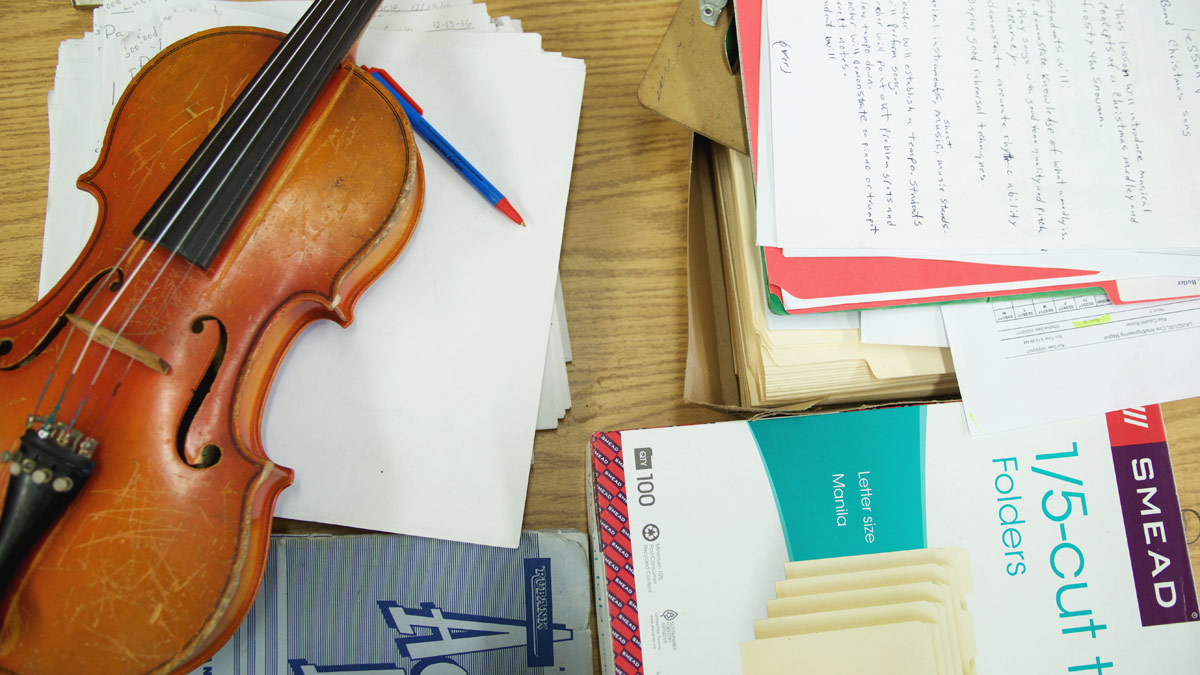 A violin bears the scars of middle school life. USC Thornton students Jonathan Sussman and John Mietus, founders of The String Bank, are working to keep instruments like this one sounding strong. (Photo by Dario Griffin/USC)

As if right on cue, a violin string broke in Barin Butler’s music class yesterday morning at the 32nd Street School. The D string. New strings are so expensive – a set of four for a bass can cost upwards of $200 – that Butler does not let students tune stringed instruments for fear of an explosion of popped strings. Always mindful of his budget, he tunes each violin, cello and bass himself, at the beginning of each class.

But on March 1, Butler’s string inventory got a welcome infusion. At noon, two USC Thornton School of Music performance students, John Mietus and Jonathan Sussman, showed up with a boxful of new strings to donate to the school. It was the first donation by their new nonprofit, The String Bank, which seeks to collect high-quality strings, both new and gently used, from top-level orchestras, universities, conservatories and professional musicians and distribute them to music programs at underprivileged schools. 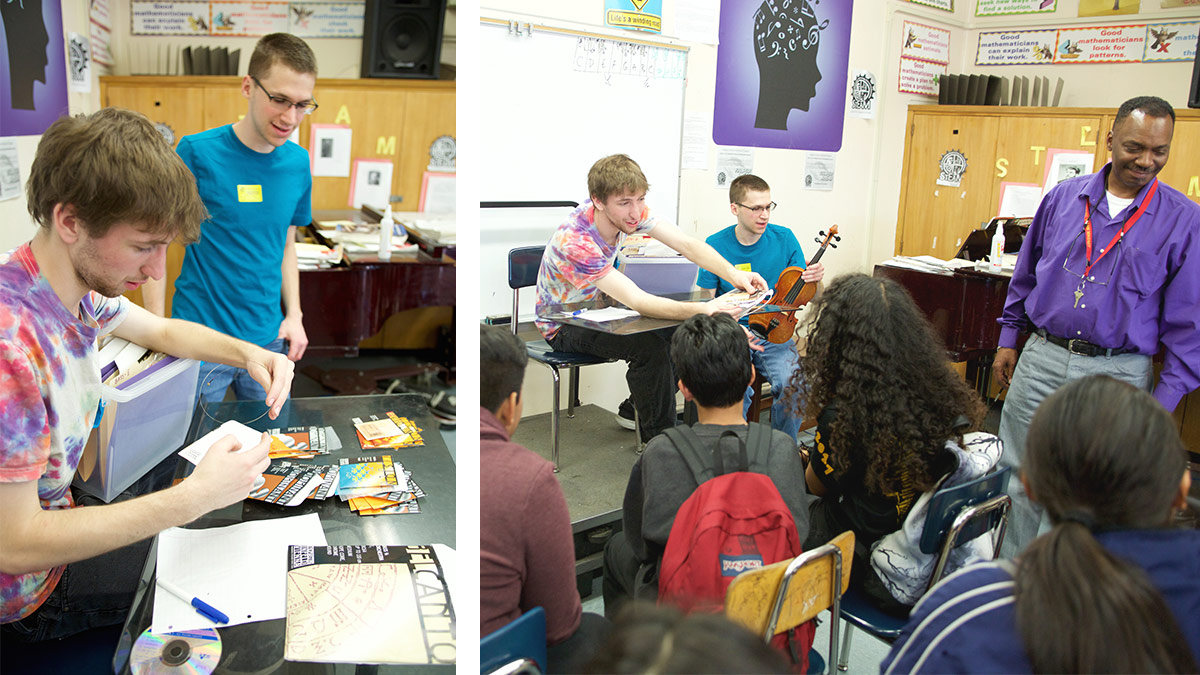 Mietus, a sophomore earning a degree in double bass performance, and Sussman, a sophomore majoring in flute performance and biomedical engineering, had the idea a year ago and applied for a Young Artists Grant from Tarisio, a London-based company that specializes in auctions of fine stringed instruments and bows. They were one of four 2016 winners (another was cellist Michael Kaufman MM ’12, DMA ’15 — see below), and they spent their $5,000 grant legally setting up the nonprofit, creating a website and trolling for donations. The third founder of The String Bank, Richard Xu, a high school friend of Sussman’s who studies violin performance at Indiana University, was especially helpful in handling the red tape associated with becoming a nonprofit.

The String Bank already has received donations from musicians at USC Thornton, The Cleveland Institute of Music, Northwestern University, the University of Iowa, UCLA and The Colburn School. Their first big donation from a professional musician came last month from famed violinist Sarah Chang, an American soloist who performs with major orchestras around the world. She sent them 134 strings, worth hundreds of dollars. 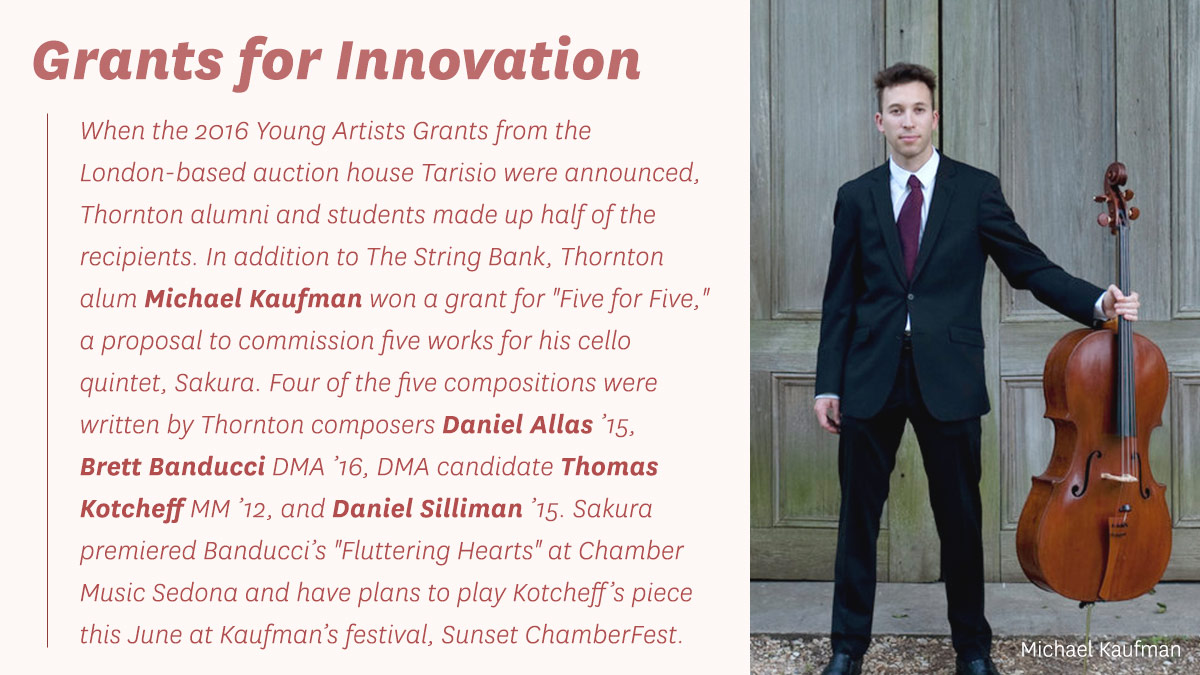 Mietus said that when he had the idea for the bank, he and Sussman (who plays violin as well as flute) did research and found that such a bank did not yet exist. “We can’t really travel the world or explore space or create anything new, so providing a service that isn’t provided efficiently was the next goal for us,” Mietus said.

He had worked at 32nd Street School last year as a sectional coach in Butler’s music program, and noticed cellos waiting for strings. Yesterday, he and Sussman delivered 30 violin strings and 4 bass strings and said they would be back when they had cello strings to donate.

As Sussman worked on replacing the damaged D string, Mietus told the assembled 26 sixth, seventh and eighth-graders in the strings class that “Sarah Chang tours around the world and now you’ll be playing on the same strings that she is.” 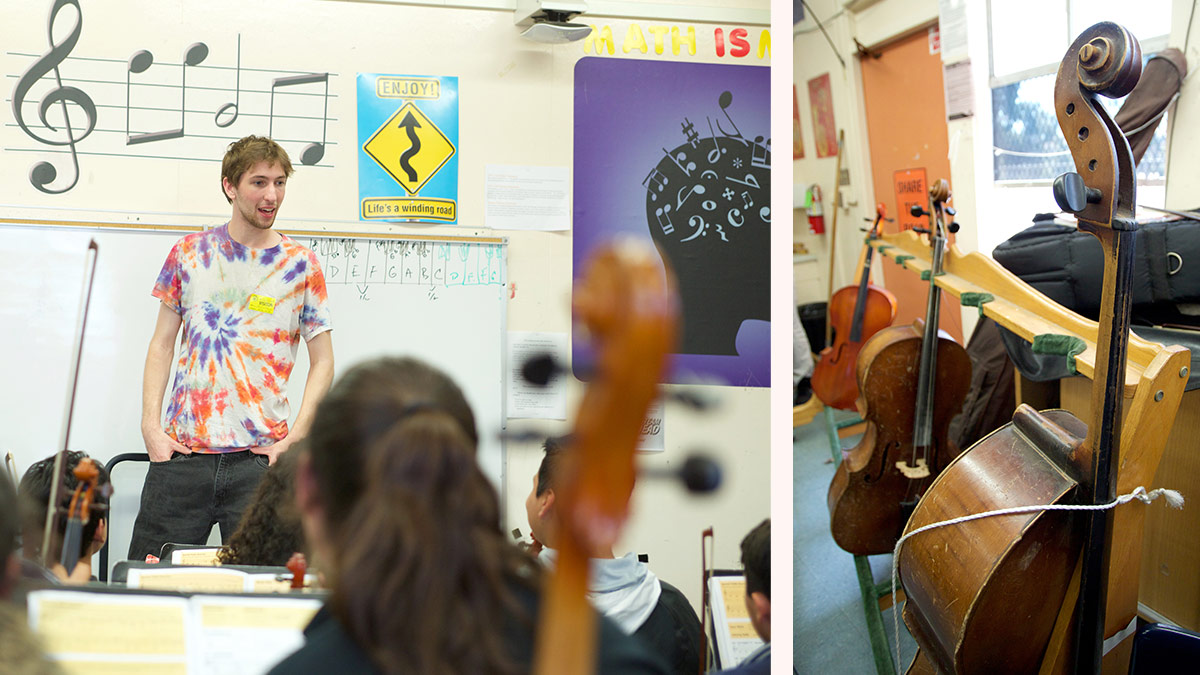 Left, John Mietus, co-founder of The String Bank, talks with music students at the 32nd Street School. At right, instruments at the school await new strings. (Photos by Dario Griffin/USC)

Butler said he was grateful for the high-quality strings, and said this initial donation could last as long as one year. He noted that his school is financially supportive of the music program, but said there is always a great need for updating instruments and keeping them in good repair. “I know many schools struggle with that,” he said.

Mietus said The String Bank founders fully intend to continue – and expand – the project beyond their college years. They would like to expand donations beyond Los Angeles, and then look at instrument donations as well.

Sussman said the experience is having an added benefit of creating a network of donating musicians while simultaneously making a difference in the community. “I hope to be involved in The String Bank for a long time and watch the organization grow,” he said.

To learn more about The String Bank, visit thestringbank.org