Hooten began his career in 2000 with a trumpet/cornet position in “The President’s Own” United States Marine Band in Washington, D.C., where he was often a featured soloist. While with the Marine Band, Hooten won the 2nd trumpet audition with the Richmond (VA) Symphony, where he continued to perform through 2004. He went on to join the Indianapolis Symphony as Assistant Principal Trumpet for two years, before his position in Atlanta. 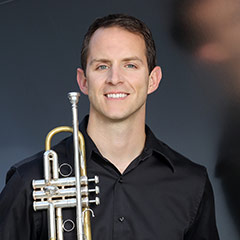