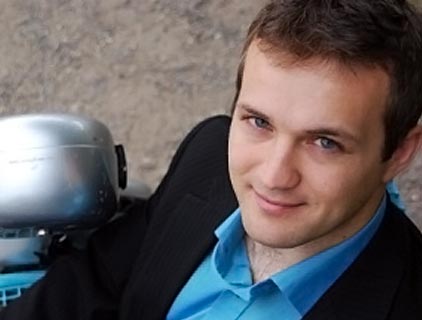 Vladimir Gorbach, a classical guitarist from Russia, begins doctoral studies at Thornton this fall as part of the first group of International Artist Fellows.

USC Provost and Senior Vice President for Academic Affairs Elizabeth Garrett oversaw the creation of the new program, which highlights the university’s six arts schools and their place in the global metropolis that is Los Angeles. The program provides tuition, travel and living expenses for fellows, allowing them to focus on creativity and supporting the production of new work. Fellows stay at USC for two or three years, depending on the graduate arts degrees they are pursuing.

The USC International Artist Fellowship Program was announced at the university’s 2011 Global Conference in Hong Kong. A year ago, Robert A. Cutietta, dean of the USC Thornton School of Music and the USC Kaufman School of Dance, and USC Associate Provost Robin Romans visited Ministry of Education officials in Beijing, Seoul, South Korea, Taipei, Taiwan, and Hong Kong to promote the new fellowship. Other arts deans also promoted the program during a series of recruiting trips across the Pacific Rim, Southeast Asia and Latin America.

In a memo to the Trojan Family about the program last week, Garrett wrote that the program links with the university’s strategic vision of “bringing the best international artists from the Pacific Rim, South Asia and Latin America to our campus for study to form a cadre of creative leaders, whose work will influence USC, Los Angeles and the world.”

Gorbach is beginning doctoral studies in classical guitar at USC Thornton. He received his bachelor’s and master’s degrees from The University of Music and Dance in Cologne, Germany, and has recorded for Naxos, the world’s largest classical label.

He won the Guitar Foundation of America’s International Concert Artist Competition, which earned him a 50-city concert tour of the United States in 2012 and 2013, including his debut at Carnegie Hall. During his seven-month road trip, he said he was struck by the variety of beautiful and contrasting sites across the country, all held together by one language. His favorite stop on the tour? “Los Angeles was honestly my favorite,” he said.

At USC, he will be primarily studying with Grammy Award-winning classical guitar professor William Kanengiser, a founding member of the Los Angeles Guitar Quartet. He is eager to explore chamber music opportunities in Los Angeles.

“The guitar is kind of a lonely instrument,” Gorbach observed.

Gorbach won the Guitar Foundation of America’s International Concert Artist Competition, which earned him a 50-city concert tour of the United States in 2012 and 2013, including his debut at Carnegie Hall.