Will Kennedy is a drummer whose musicality and finesse are legendary in the jazz world and beyond, performing with luminaries such as Herbie Hancock, Chaka Khan, Snarky Puppy, Bobby McFerrin, Esperanza Spalding, George Benson, and Lee Ritenour. His career is marked by pushing musical boundaries and a desire to be inspired yet be an inspiration.

Kennedy is a longstanding member of the Yellowjackets, the celebrated jazz quartet that includes fellow USC Thornton faculty members Bob Mintzer and Russell Ferrante. Kennedy’s partnership with the ensemble began in 1988. “I was a long-time fan of the group,” recalls Kennedy, “and knew this was something I just had to do.” The band has recorded close to 30 albums and been nominated for 17 GRAMMY Awards. They have adventurously amplified the eclectic, electro-acoustic soundscape, creating a unique jazz sound since their fusion beginnings.

Kennedy played percussion and began private lessons with teacher Bill Nawrocki throughout his school years. He also studied under professor and mentor Bill Bell, performing with him in San Francisco. Kennedy quickly became a fixture in the Bay Area scene as a teenager, and was introduced to legendary steel pan virtuoso Andy Narell with whom he recorded and toured Europe. His time in the studio uncovered his fascination for composing, leading him to publishing company Pure Delite Music with partners Claytoven and Larry Batiste and contributing songs to various R&B artists through the label. He has gone on to a robust and diverse career with projects in television, GRAMMY telecasts, recording sessions, soundtracks, international tours in addition to his work with the Yellowjackets.

Giving back to young, aspiring musicians is a high priority for Kennedy, who has conducted drum clinics worldwide and produced online, educational videos. He is a spokesman for some of the finest equipment manufacturers including Pearl Drums, Zildjian Cymbals, Evans Drumheads, and ProMark Sticks.

Joining the Thornton faculty in Fall 2018, Kennedy is taking over the duties of drumset instruction for Ndugu Chancler, longtime faculty member and one of the founders of the Popular Music program. 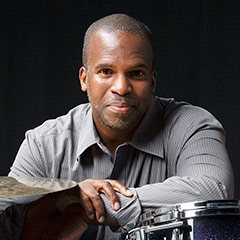