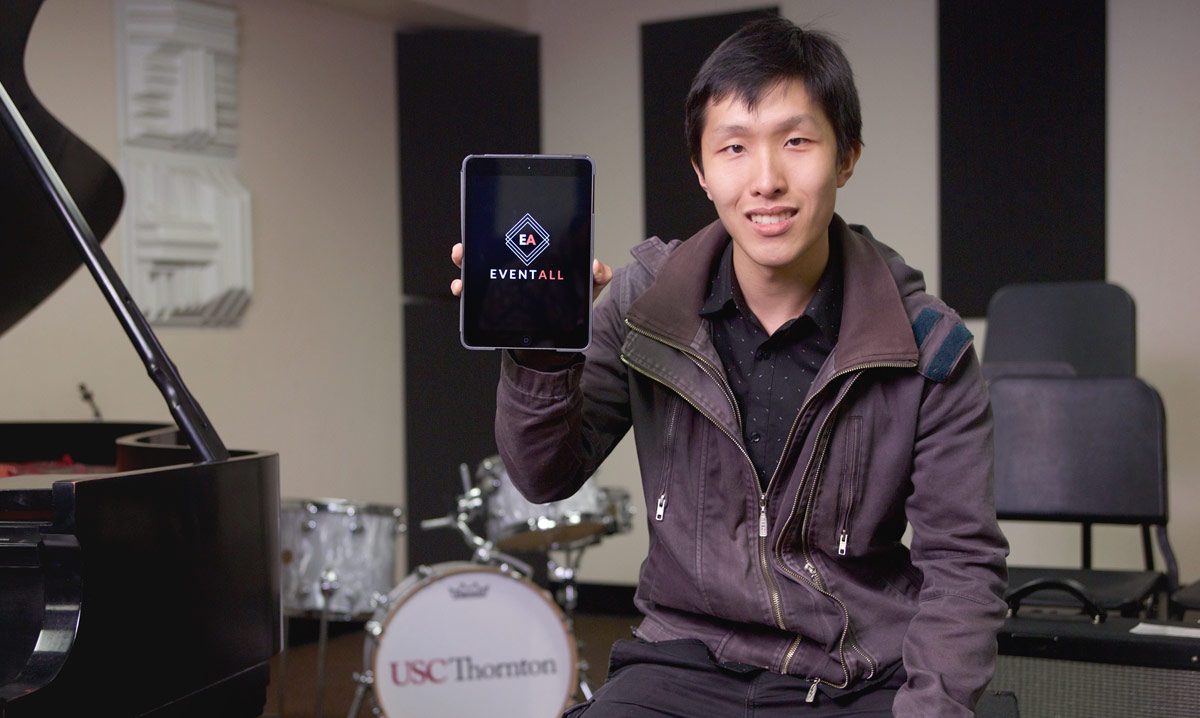 Alvin Liang has quite a few music industry insiders expecting big things from him. Not for his artistry, mind you, but for his killer apps.

Young speaks not only as Liang’s faculty advisor and mentor, but also as former director of licensing and contracts at Universal Music Group, the world’s largest record label.

His industry peers would agree. Last spring, the 21-year-old Liang floored a trio of executives from Capital Music Group, Universal Music Group and the artist management firm Friends at Work when he proposed, as part of a class assignment, an unlikely venue for Ariana Grande’s next international tour. Presenting to the music execs in Young’s think-tank-style advanced seminar on music media solutions, Liang had zeroed in on a remote spot in Russia.

“Why exactly there?,” the industry panel had wondered.

“We were just with our jaws on the floor,” Young recalls. “Nobody taught Alvin to do that. He has his own way of going about things, what he thinks of as ‘growth hacking’—utilizing skills he picked up in lots of different places: at Thornton, at the Marshall School, in his internships. He’s a doer, a creator of his own fate. He constantly impresses me.” 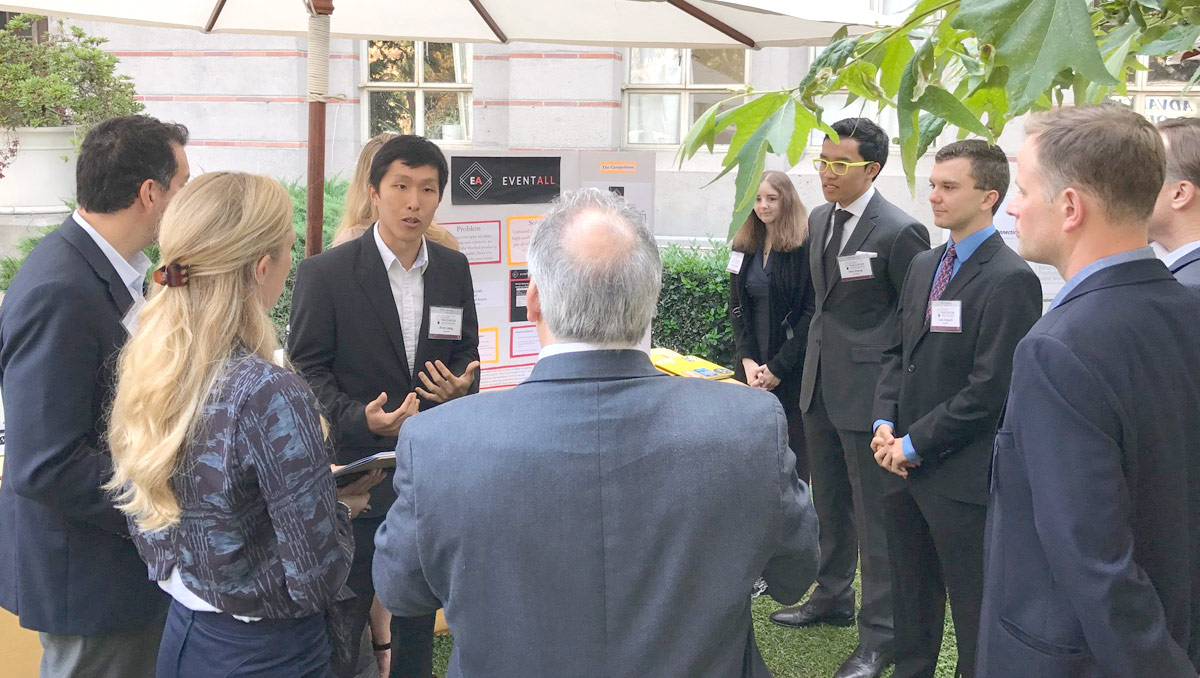 Others in the USC startup ecosystem have also noticed. In October, Liang wowed the judges at the 11th annual USC Stevens Student Innovator Showcase, landing his team the $10,000 grand prize for “Best Business Concept.” His idea: a scalable, self-serve event-planning platform called EventAll.

“The WordPress of the event-planning world,” is how Liang describes it in his elevator pitch.

The prize money will help build out a functional EventAll prototype. Liang and his partners—all classmates from his “Feasibility Analysis” course at USC Marshall—are currently building out the product and rapidly expanding their list of event organizers interested in beta-testing the platform. They expect to launch when Liang, who will be CEO, graduates in May.

From Piano Prodigy to Tech Pioneer

The child of Taiwanese immigrants, Liang grew up in San Diego dreaming of being a concert pianist. He played his first concerto at age 10 with the New City Sinfonia. At 17, he made his Carnegie Hall debut in a winners’ concert for the International Robert Schumann piano competition. But Liang’s own musical passion took an unexpected turn when he tried high school courses in digital composition and recording arts. From composing his own electronic music, he moved into producing soundtracks for student films, writing scores for indie videogames, and forming his own record label.

A scholarship student, Liang came to USC—his first-choice school—to study in USC Thornton’s top-ranked Music Industry program. He soon found a second home at USC Marshall’s Lloyd Greif Center for Entrepreneurial Studies, where he pursued an entrepreneurship minor. As luck would have it, that program is also ranked No. 1 nationally. 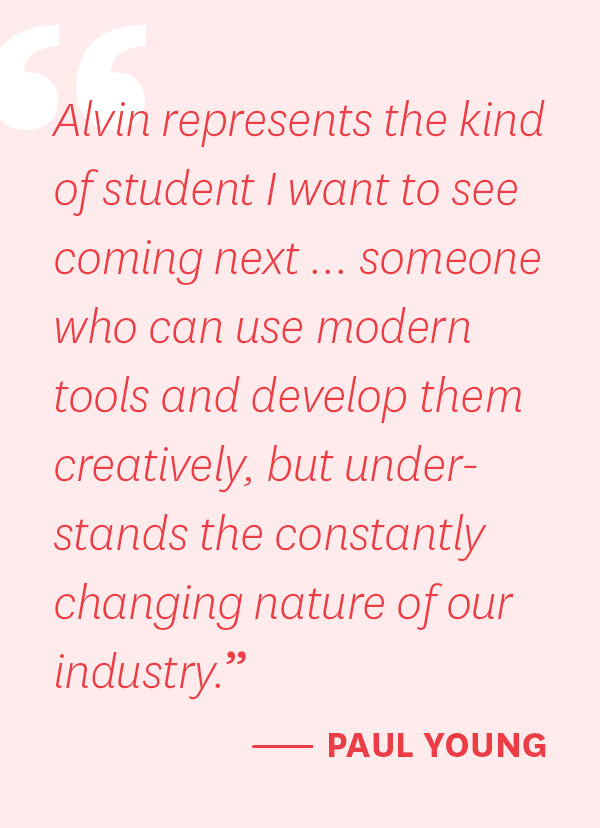 Liang arrived at USC already brimming with business ideas. Young vividly recalls their first meeting. It was at a Thornton freshman luncheon during Welcome Week. Having spent the summer mastering YouTube search-engine optimization, Liang sketched out some possible ways to monetize music videos for artists.

“I’ve never had a student come up to me and start a conversation with such an enterprising thought,” Young recalls. “I absolutely wanted to foster him from the moment I saw him. He was attacking a problem that I had begun thinking about much later in my career. And this was before he’d even taken a class!”

The two struck up a friendship. Liang has spent many hours with Young, himself a GRAMMY-nominated jazz trombonist and active studio musician, brainstorming on tech-based solutions to the music industry’s revenue drought. The problem in a nutshell: In a market where streaming has supplanted CDs, fans have come to expect access to artists and their creative output for little or no money.

“There’s so much technological change,” Liang says, in a tone that’s equal parts lament and impatient zeal. “Professor Young says we are the generation that has to solve this. If we can’t figure out a viable business model, this industry will struggle to survive.”

Internships with a major videogame maker, a fledgling 3D audio startup and a growth hacking consulting company have reinforced Liang’s determination to rise to Young’s challenge: “How can we come out of this a better music industry? How can we solve these revenue issues? These questions are always in the back of my mind,” he says.

Which leads to Liang’s prize-winning app.

“I think EventAll is a really powerful solution to the monetization problem, because many people think events are the future of the music business,” he says. 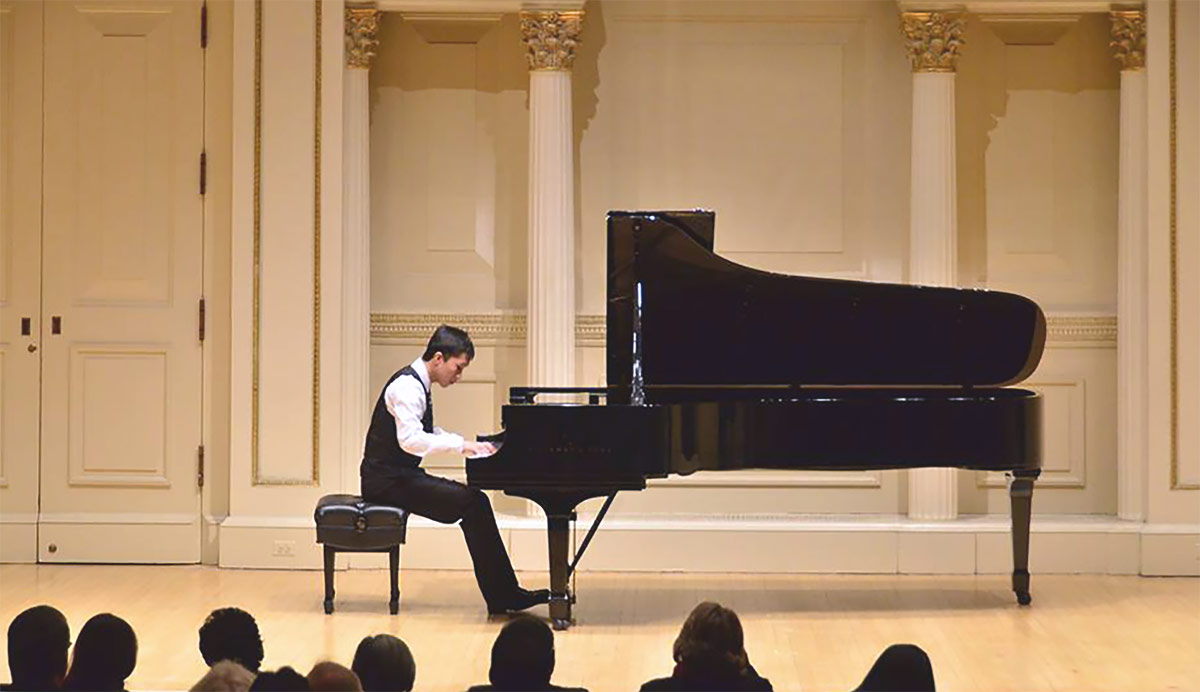 Alvin Liang’s musical roots run deep. At 17, he made his Carnegie Hall debut in a winners’ concert for the International Robert Schumann piano competition. (Photo courtesy of Alvin Liang)

An App for All Seasons

Sitting in the dining room of an old Victorian rental on Orchard Avenue, Liang sips tea as he describes EventAll. He peppers his phrases with marketing jargon like “user acquisition,” “upselling,” “ancillaries” and “B2C side.” But the soul of a musician shines through.

“Our business model is focused on being able to serve everyone, regardless of their event size, budget size, providing different levels of functionality and support,” he says.

Today’s event apps are deeply flawed, he explains. They’re custom-made for a single event by people who are computer programmers, not artists or event planners. Each app can take up to a year to build, at a cost of $20,000 to $100,000 a pop. The short shelf-life strongly discourages organizers from splurging on deluxe features, especially when they know that many event goers will ignore their app. 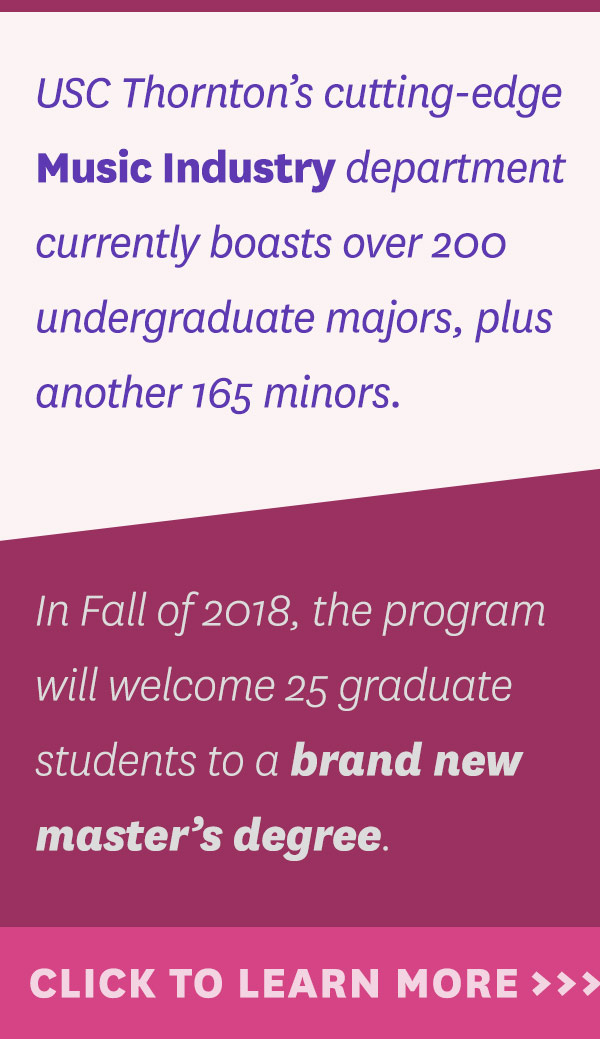 “The worst part,” says Liang, “is after you spend all that time and money, only 10 people download the app. Or they download it and then delete it. Or they can’t figure it out, so they just use one of the 12 functions you spent $100,000 making. We wanted to solve all of those problems.”

EventAll is a flexible, self-serve platform that lets customers flow their branded event content into a flexible template. It’s also a cloud-based event-hosting platform, which means organizers can connect early with their target audience and stay in touch long after the crowd goes home.

“Alvin has created something that democratizes the whole calendar and fan connection process—from the smallest club owner to the largest promotion company,” says Young. “He’s finding a way to standardize something that had not been standardized.”

Liang envisions a sliding fee structure. A simple event app for a 200-guest wedding might cost just $50, while organizers of mega-events like Coachella could access the full range of EventAlls functionalities—for example, advance ticket sales or in-app food and beverage ordering to reduce concession lines. Liang even has plans to integrate high-tech solutions such as blockchain applications. Well-heeled clients could also tap EventAll’s customer support team to design new bells and whistles. Any new platform feature could later be integrated into the EventAll template to benefit promoters at all levels. On the user side, Liang plans to incorporate popular event-related features found on Goldstar, Facebook and Meetup to let attendees search for events by area, make wish lists, send event invitations to friends and meet new friends based on shared interests. 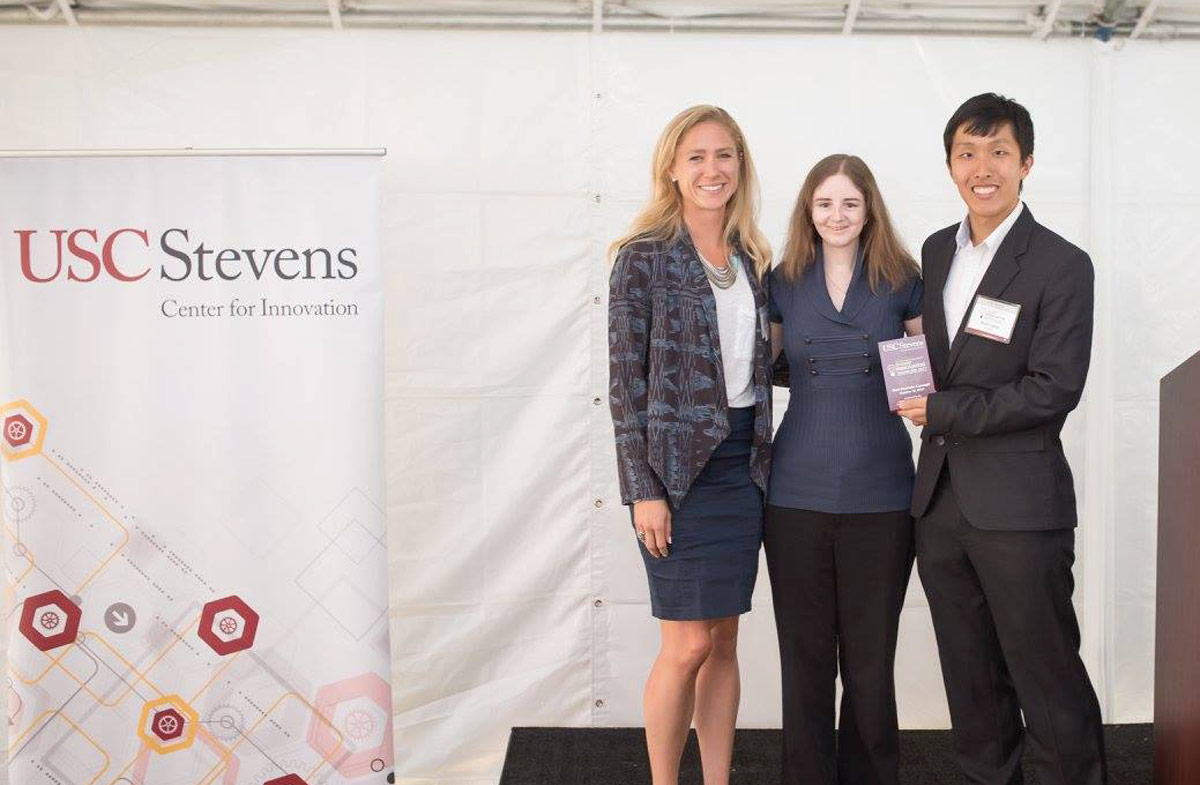 Young is sanguine about Liang’s chances of success with EventAll. “He’s got the code developed for the backbone. He’s still got more work to do–that’s why it’s appropriate he won that innovation award. He’s still in development. But he has a very clear vision of where he’s going, and I haven’t been able to poke holes in it. And I honestly tried for his benefit.”

Whether Liang is up to the bigger challenge of fixing the music industry’s broken revenue pipeline remains to be seen. But Young is hopeful.

“Alvin represents the kind of student I want to see coming next,” he says. “He’s the model of something that has been fairly elusive—someone who can use modern tools and develop them creatively but understands the constantly changing nature of our industry.”

So don’t be surprised if you start to see Alvin Liang in business magazines and music trade publications.

“I think the industry is going to know his name; and in software development, they’ll also know his name,” Young says. “I wouldn’t say that if I didn’t believe it.”