Cinema Verisimo, the newest album by USC Thornton Classical Guitar doctoral candidate Mak Grgic, received praise from both the New York Times and the Independent (UK). The album features original arrangements of classical works written specifically for, or featured prominently in popular films, which the Independent called both “cleverly compiled” and “ingeniously arranged.”  Among the album’s highlights are Nino Rota’s “Godfather’s Waltz” from The Godfather and Ennio Morricone’s theme from The Good, the Bad and the Ugly. 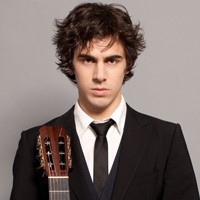