Choral & Sacred Music alum Alexander Lloyd Blake (DMA ’19) has been named as one of Musical America’s 30 Professionals of the Year. The annual report recognizes performing arts professionals who make significant contributions to the vitality of the performing arts world.

Blake is recognized for his work as director of the choral group Tonality, which he founded in 2016 while studying at USC Thornton. The group performs works about social justice issues, with the mission to promote unity and equity, and advance underrepresented voices in the genre.

In addition to his work with Tonality, Blake has made his mark through a number of other accomplishments. Since his time at USC Thornton, he’s held numerous positions, including as Director of Classical Choirs at Los Angeles County High School for the Arts, and as a Principal Associate Conductor of the National Children’s Chorus. As a singer, has also sung for films such as “Us” and “The Lion King.” 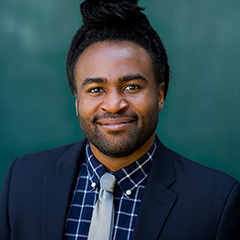