USC Thornton alumnus Alexander Miller (DMA ’10) will perform a multi-media project To…Oblivion: Historic Landmarks Around Los Angeles for the first time in its entirety on Friday, October 25 at Boston Court Pasadena. Using electric guitar and audio and visual effects, Miller’s performance will explore six LA landmarks that have been irreparably altered or destroyed.

The program includes musical depictions of locations including the Belmont Tunnel, Anaheim’s Center Street and Zanja Madre. In an interview with the LAist, Miller explained that he hopes the project will impact how residents relate to their city. “Maybe that inspires people to wonder what’s the story of their own neighborhood,” Miller said, “what are they missing, what’s the story of the ground beneath their feet.” 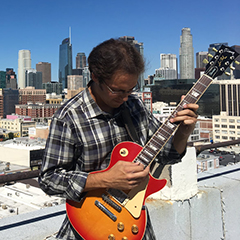