Vocal Arts alumna Angela Meade (MM ’04) was featured on the cover of Opera News magazine, published by the Metropolitan Opera Guild. The former student of Vocal Arts professor Gary Glaze and November cover star was featured in the 13th annual diva issue as a young, powerful, and undeniably talented soprano. Her voice was described as one with a “plush, large-scale sound; a secure, ringing top; an incisive lower range; and, above all, with a realization of every note of the score, with the treacherous coloratura passages voiced firmly, fully – and thrillingly.” Meade will reprise her role as Elvira in Ernani this season at the Metropolitan Opera. 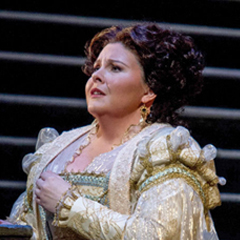