USC Thornton alumna Tamar Davis (BS ’02, music industry), known professionally as Támar, is one of the contestants remaining on the hit NBC show The Voice. As part of a team of artists mentored by pop music star Christina Aguilera, Davis competes each week in group and solo performances. A recent performance—a duet of “Lady Marmalade” with fellow contestant Shalyah Fearing—earned a standing ovation from the judges and the audience, keeping Davis safe for the next round of the competition.

Formerly, Davis performed alongside Beyoncé and Kelly Rowland in the group Girls Tyme, but left to finish school before the two formed Destiny’s Child. She also performed at the Kennedy Center for former President Bill Clinton and toured with R&B singer Tamia after graduating from USC.

In 2006, Davis was nominated for a GRAMMY Award for the song “Beautiful, Loved and Blessed,” which she wrote with Prince. Davis currently leads the touring cast of Motown: The Musical in the role of Diana Ross. 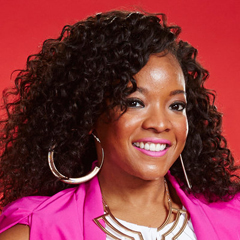