Singer, actress, and USC Thornton alumna Renée Elise Goldsberry (MM ’97, jazz studies) has been nominated for a Tony Award for her performance as Angelica Schuyler Church in the hit Broadway musical, Hamilton. The production, which is nominated for a record 16 Tony Awards, has received rapturous acclaim from critics and audiences, alike. Goldsberry has performed in the central role of Angelica Church since Hamilton‘s off-Broadway debut in 2015.

Goldsberry has previously been featured in Broadway productions of the Lion King, the Color Purple, and Rent, and has enjoyed recurring television roles on Ally McBeal, One Life to Live, and the Good Wife.

For her work in Hamilton, Goldsberry has won both a Drama Desk Award and a Lucille Lortel Award for Outstanding Featured Actress in a Musical and was the recipient of a GRAMMY Award for Best Musical Theater Album when the original cast recording received the honor this year. The Tony Awards ceremony will take place on Sunday, June 12, 2016. 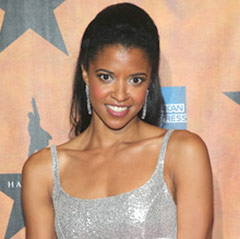