Classical guitarist and USC Thornton alumnus Ben Pila (DMA ’11) has been invited to perform for Pope Francis during the pontiff’s Sept. 25 visit to the National September 11 Memorial & Museum in New York City. Pila has become a semi-regular presence at the memorial’s anniversary events, performing for dignitaries including Presidents Barack Obama and George W. Bush and sharing the stage with artists such as Paul Simon, violinist Itzhak Pearlman and cellist Yo-Yo Ma.

Pila, currently a guitar instructor at Polk State College in Florida, brushed off the pressure of such a high-profile event, noting that “I’m going to play at my highest level. But, in a lot of ways, it won’t be any different than if I were playing a local gig. When I play, I’m only focused on playing.” 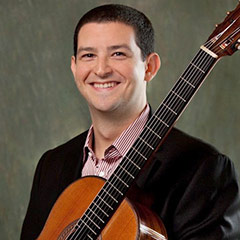