USC Thornton Studio/Jazz Guitar alumnus Terry Carter (MM ’02), a Los Angeles-based guitarist, producer and educator, has released a new mobile app to parallel his Rock Like the Pro’s guitar book series. Users of the Rock Like the Pro’s app will have access to over 300 videos and lessons that cover the logistics of learning the guitar, styles of guitar playing, and the music theory for both the guitar and the ukulele. 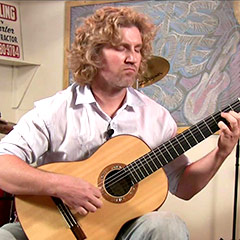