USC Thornton alumnus Robin Kesselman (’12, double bass), principal bass of the Houston Symphony Orchestra, enjoyed his solo debut with the ensemble earlier this year. Kesselman performed Serge Koussevitzky’s Concerto for Double Bass on the January program, which featured contemporary music from the Americas and was led by conductor Andrés Orozco-Estrada.

“Koussevitzky was an incredible musician in the American scene. His bass concerto is a heart-on-sleeve, emotive kind of piece. It’s the kind of lyrical play that we rarely get to do,” said Kesselman.

Kesselman has previously performed with the Saint Paul Chamber Orchestra, the Philadelphia Orchestra, the Los Angeles Philharmonic, and the National Symphony. 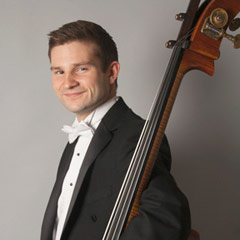