Billboard recently profiled the band Fabriq on the release of their third single, “Get Behind the Feeling.” Band members Daniel Davila (BM ’18) and Cooper Bell (BM ’18) are both recent graduates of the USC Thornton Popular Music program and draw inspiration from Bruno Mars, Maroon 5, and Jamiroquai.

According to the musicians, “Get Behind the Feeling” is the group’s reaction to the mixed emotions wrought by millennial hookup culture, as portrayed in a music video directed by Nicolas Wendl. Fabriq plans to release an EP this summer. 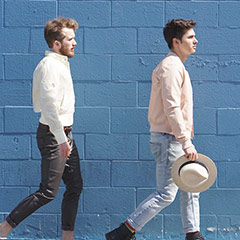