To celebrate Mintzer’s appointment, the band recently held a welcome concert for their new conductor. Mintzer brings a wealth of experience to his new position. A renowned bandleader and saxophonist, he has been playing in big bands since 1975 and has worked intermittently with the WDR Big Band for the past 30 years. In 2001, Mintzer’s own ensemble, the Bob Mintzer Big Band, won a GRAMMY Award for Best Large Jazz Ensemble Album.

Fellow Jazz Studies faculty member and alumnus, Vince Mendoza, has also been appointed Composer in Residence and 1st Guest Conductor for the WDR Big Band’s upcoming season. Mendoza has been working with band since the 1990s and arranged the ensemble’s GRAMMY Award-winning 2006 album “Some Skunk Funk.” 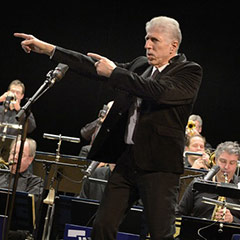