Brian Robert Jones (BM ‘15), an alum of the USC Thornton Popular Music program, recently released No Strings Attached, an *NSYNC cover album celebrating the 20th anniversary of the band’s 2000 album of the same name. The album is filled with fresh takes on the original album’s iconic hits, and features appearances by some of Jones’ friends and collaborators, including fellow Popular Music alum Ren Farren (BM ’15) and Chris Tomson, drummer for Vampire Weekend.

Following the release, Jones appeared on *NSYNC member Lance Bass’s podcast, The Daily Popcast with Lance Bass, to discuss the project. “I thought it would be fun to reimagine and celebrate the record because I knew the 20th anniversary was coming up,” Jones said. “It’s an album that’s just stuck with me forever.” 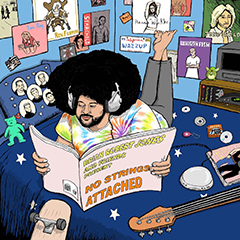