Calder Quartet featured on the cover of Strings Magazine

The Calder Quartet, which was formed by USC Thornton alumni Benjamin Jacobson, Johnathan Moreschel, Eric Beyers and Andrew Bulbrook, is featured on the May 2015 cover of Strings Magazine. The feature article explores the changing performance landscape for chamber quartets and the increasing role that music schools play in equipping students for successful careers. Bulbrook is quoted on the topic of professional development, saying, “I think it’s one of those things that when you’re younger it’s hard to realize how much you’re going to use it later.” 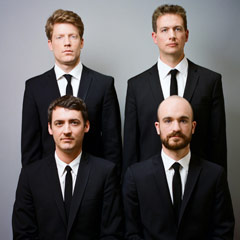