USC Thornton alumna Courtney Wise (BM ’10) recently released an album titled Senza Misura with her flute and guitar group, Duo Bohème. Wise founded the group with guitarist Lyle Sheffler, and they specialize in Spanish, Latin, and Bohemian flute and guitar music. Wise, who studied with USC Thornton faculty Gary Woodward, is a proponent of contemporary works and has participated in many premieres including After the Flood, written for her by Noah Luna in 2009. 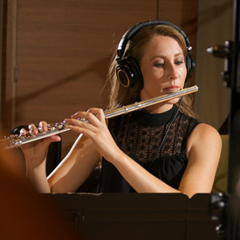