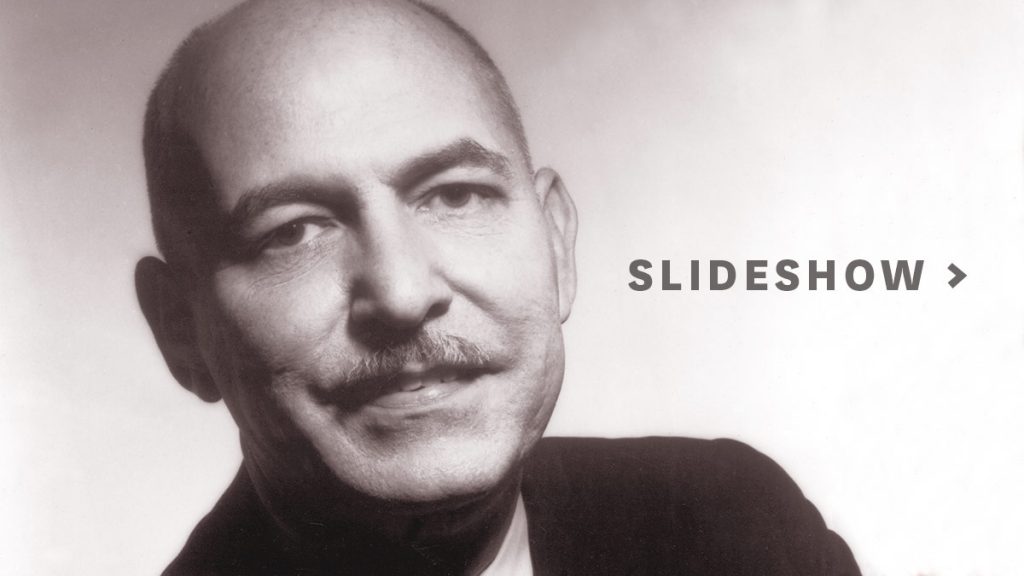 William Vennard (1909-1971), chair of USC Thornton’s voice department from 1950 until his death, was a pioneer in the development of science-informed voice pedagogy.

William Vennard (1909-1971), chair of USC Thornton’s voice department from 1950 until his death, was a pioneer in the development of science-informed voice pedagogy. 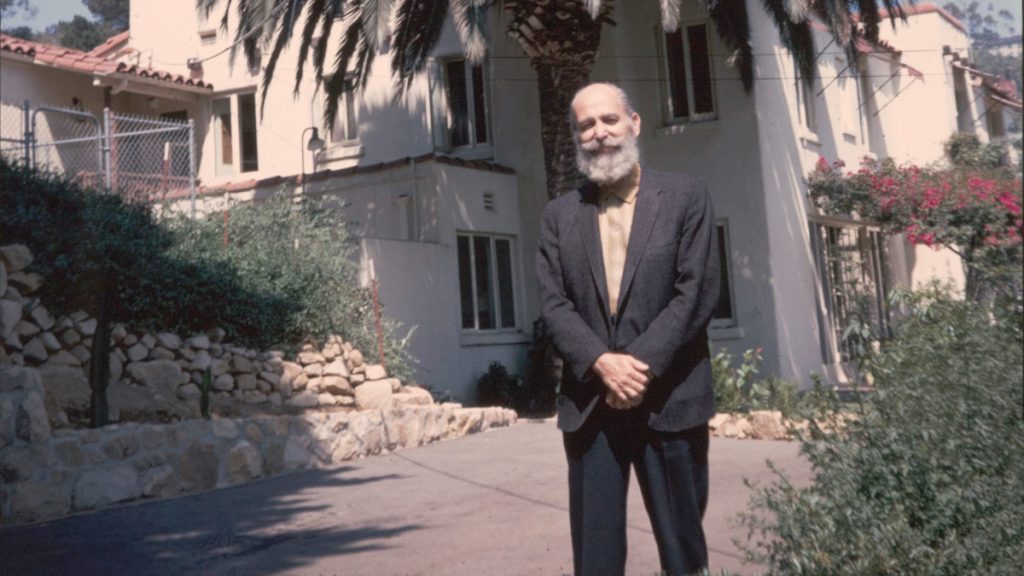 Vennard in Santa Barbara in the summer of 1966. (Courtesy of the USC Libraries)

Vennard in Santa Barbara in the summer of 1966. (Courtesy of the USC Libraries) 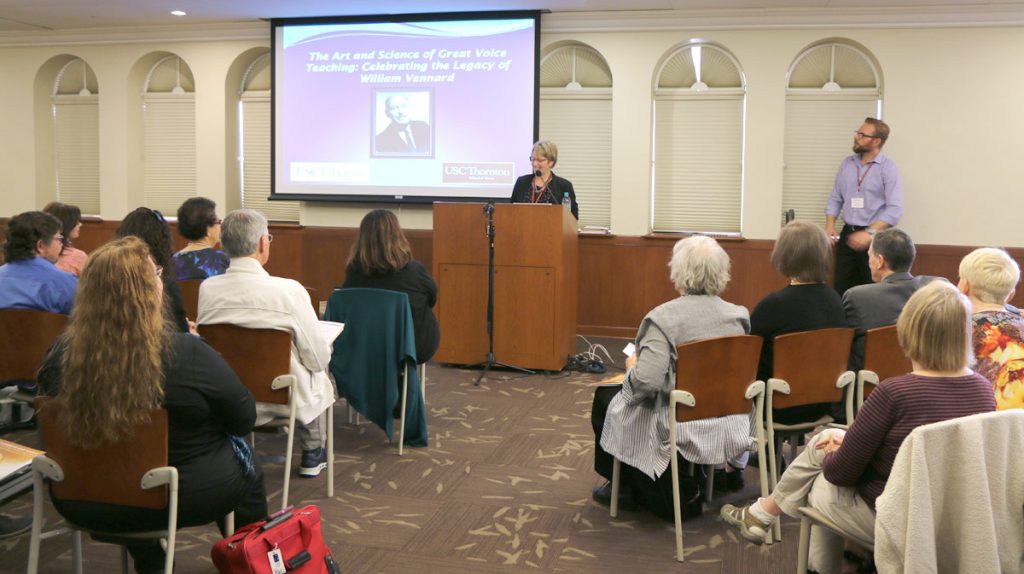 Lynn Helding introduces the Vennard Symposium on Friday, May 18th, 2018, at the USC Music Library.

Lynn Helding introduces the Vennard Symposium on Friday, May 18th, 2018, at the USC Music Library. 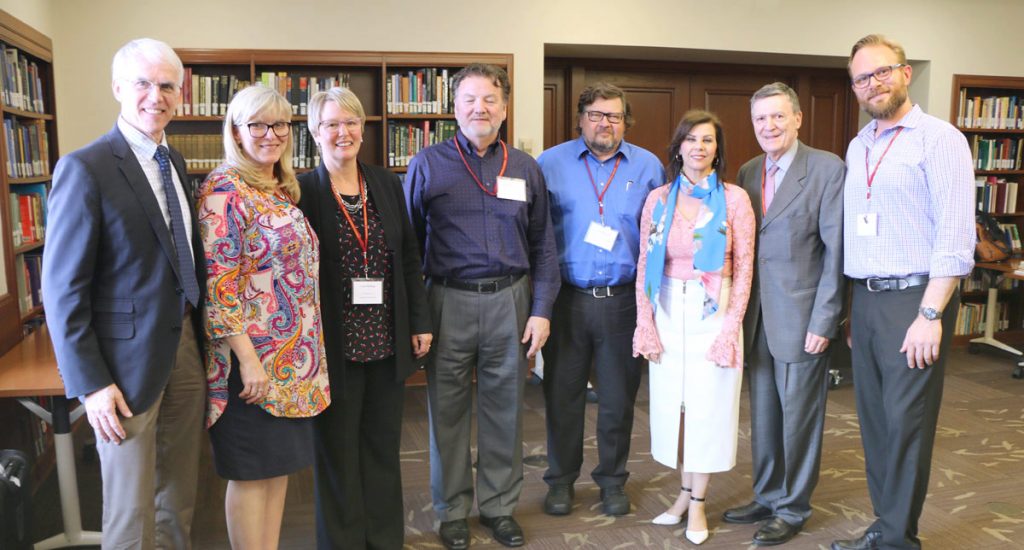 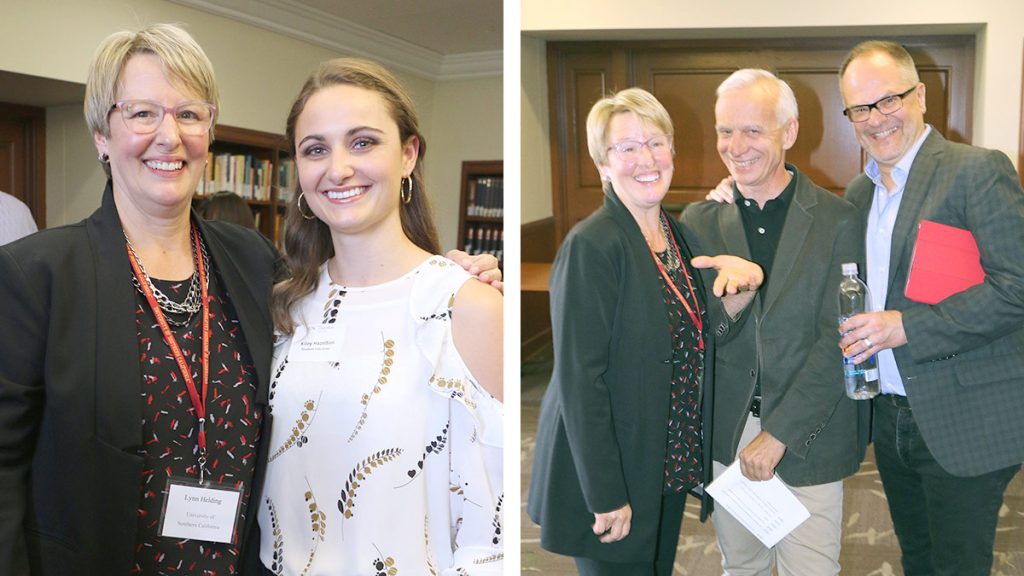 Last May, a group of like-minded vocal teachers, historians, scientists, and singers gathered at USC’s Doheny Memorial Library to celebrate the legacy of William Vennard (1909-1971). Chair of USC Thornton’s voice department from 1950 until his death, Vennard was a pioneer in the development of science-informed voice pedagogy, or the science behind healthy singing.

The audience murmured in astonishment when Andrew Justice, head of the Music Library, introduced a 1,435-line document cataloging the hundreds of letters, sheets of music, photographic slides, and audio recordings of the new William Vennard Collection. It was clear to everyone involved that Vennard’s work was truly ahead of its time.

Like so many invaluable research materials, the Vennard Collection originated in the most unexpected of places — an Illinois garage. When a collector discovered two boxes of Vennard’s slides at an estate sale several years ago, she sought out the guidance of Lynn Helding, professor of Vocal Pedagogy at USC Thornton and a thought-leader in the field of vocology. Helding subsequently turned to a former student of Vennard’s, Thomas Cleveland of the Vanderbilt Voice Center, who revealed that he had been gifted the professor’s entire body of research.

Vennard’s archives and slides were en route to USC about a year later, with a little help from a USC Libraries’ Dean’s Challenge Grant. 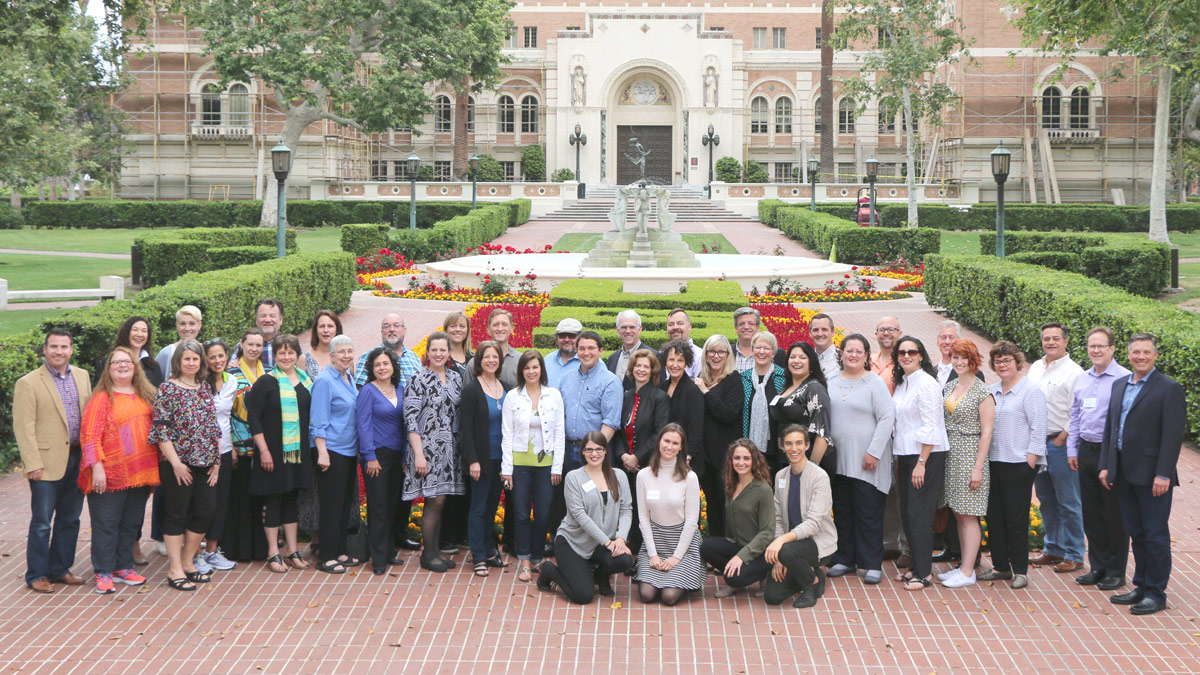 Participants in the 2018 Voice Pedagogy Summit included experts from 35 universities across the U.S. and Canada, as well as USC Thornton faculty and students. (Photo by Irena Preda)

William Vennard was a notable teacher of singing — among his most famous USC alumni is operatic mezzo-soprano Marilyn Horne — but he is best remembered for his study of the science of healthy singing, a field now known as science-informed voice pedagogy. Helding, who helped organize the symposium, noted that Vennard’s research was largely concerned with physiology, but has since expanded to include other fields.

“In the 70’s, the research became very focused on acoustics. How do singers use their instrument to create a bigger sound?” Helding said. “Today, the forefront of the research is cognitive science and motor-learning theory. That’s been a big interest to instrumentalists and singers, but also to dancers and even athletes.” 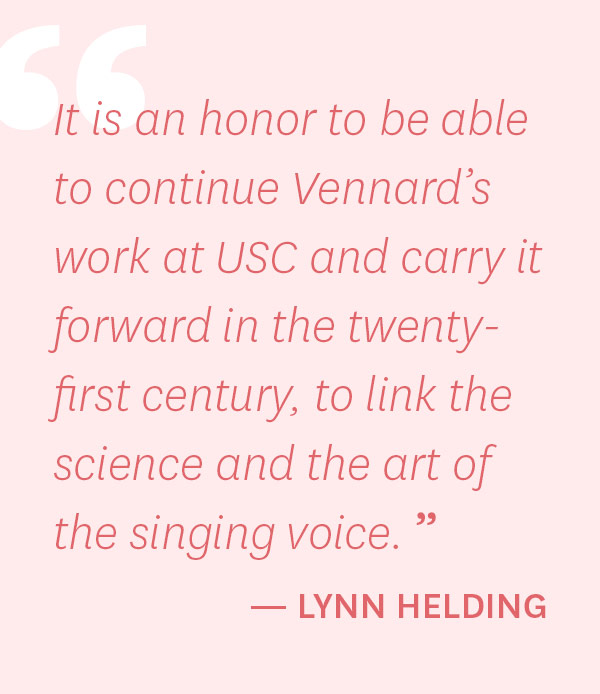 With eight presenters, the day-long symposium included topics such as “Evidence-based Voice Pedagogy: In Defense of Scientific Understanding” and “The Missing Mind: The Third Pillar of Voice Science.” Participants also enjoyed time to explore the Vennard Collection, including photographs taken during the creation of his award-winning 1960 documentary film, Voice Production: The Vibrating Larynx.

“Here we had this amazing opportunity to really see inside the mind of a first-rate scholar,” Helding said. “I just sat the students down and said, look, I could give you a traditional assignment or we can go get our hands dirty in this collection. They could see this was an amazing opportunity.” 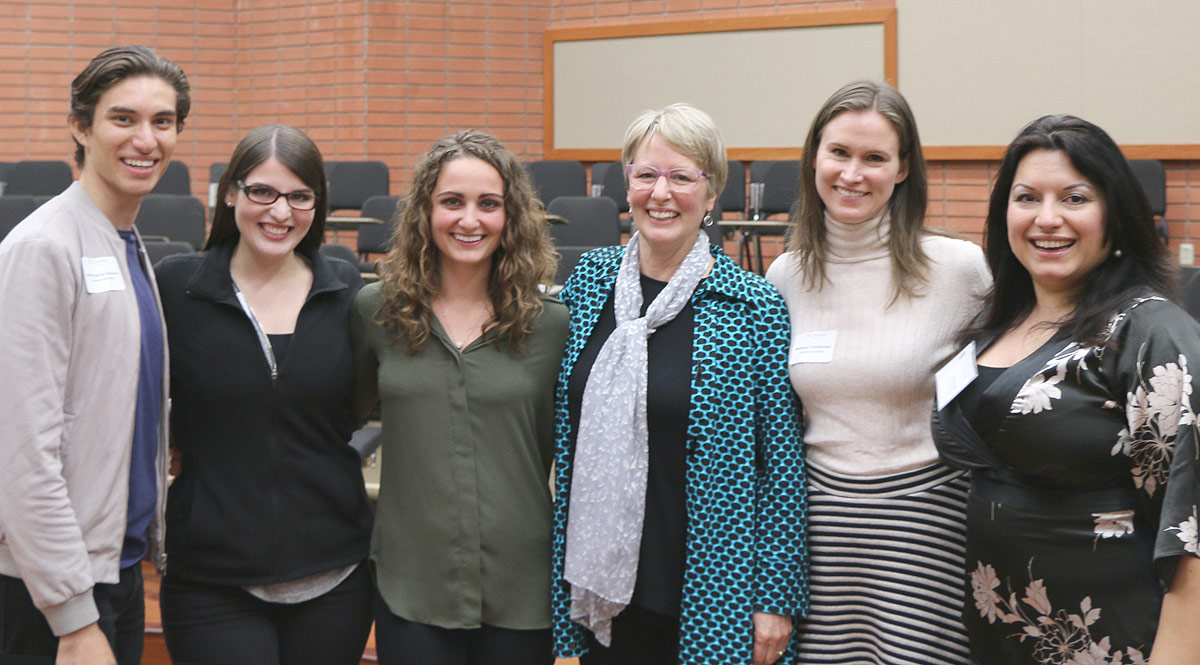 A number of USC Thornton Vocal Arts & Opera students were instrumental in organizing the symposium and summit, including Allen Pearcy-Galeana, Graycen Gardner, Kiley Hazelton, Melissa Treinkman, and Irena Preda. Treinkman, a DMA candidate, will participate on the editorial committee for the summit’s forthcoming position paper. Not pictured are Rina Ritivoiu and Colin Stave. (Photo by Irena Preda)

A Prelude to Pedagogy

The public Vennard Symposium was the kick-off event for a separate, two-day summit about the future of vocal pedagogy, attended by 39 experts invited from 35 universities across the U.S. and Canada. Building on the success of a similar event at the Ohio University in 2015, the attendees convened a round table to articulate new standards for the future of science-informed voice pedagogy.

“What should people be teaching?,” Helding said. “What sort of topics must have priority in a curriculum?” Their conclusions will be manifested in a position paper, signed by all 39 summit participants, which will become the appendix of the forthcoming book, Proceedings from the Vennard Symposium, featuring essays by the symposium’s seven speakers and a foreword by Marilyn Horne. 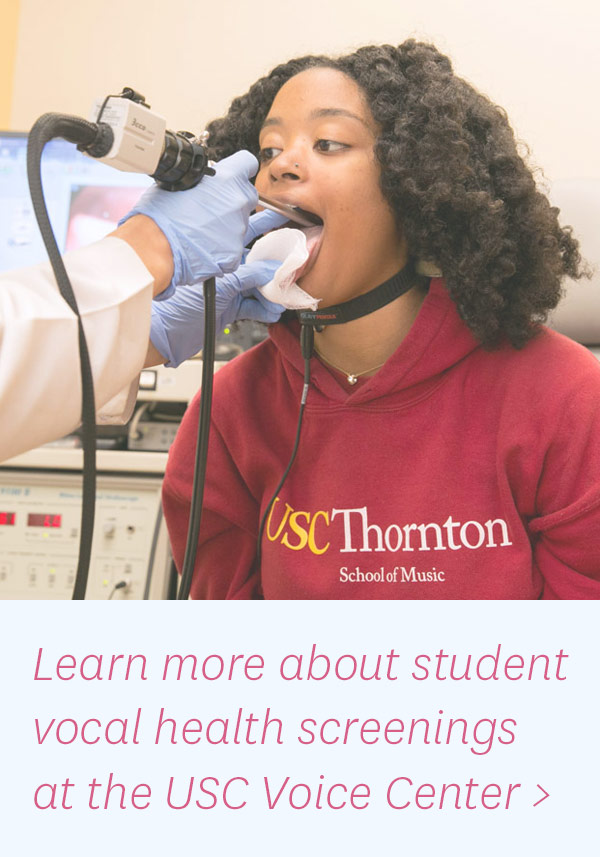 The inclusion of non-classical vocal genres, such as musical theater and pop, as well as transgender voice, were some of the more pressing issues evoked at the May summit. “These are big issues now in this field,” noted Helding. “I know the next time that we do this, the interest from these advocates will be even greater.”

“The students are truly blown away when they can see their own vocal cords in real time,” Helding said. “Very few voice programs, anywhere in the world, can offer this.”

Helding has worked with Dr. Michael Johns, Voice Center director, and Dr. Edie Hapner, professor of Clinical Otolaryngology – Head and Neck Surgery, to create a semester-long voice medicine course to be offered on site at the USC Voice Center in Spring 2019 so that students may learn even more about their instruments.

“Everybody wants more of this,” Helding said. “It is an honor to be able to continue Vennard’s work at USC and carry it forward in the twenty-first century, to link the science and the art of the singing voice.”