Beginning on Thursday and running through the weekend, the Los Angeles Philharmonic celebrates the anniversary of the Walt Disney Concert Hall’s famous organ, Hurricane Mama, with a series of concerts. As Mark Swed wrote in the Los Angeles Times, “But no other organ looks like French fries, a thrilling trademark of the Frank Gehry hall’s design. No other organ of this scale benefits from bellowing in the surround-sound of Yasuhisa Toyota’s magnificent acoustic. And no other organ is named Hurricane Mama, as Terry Riley dubbed it when he gave his memorably psychedelic first recital on the instrument in 2008.” 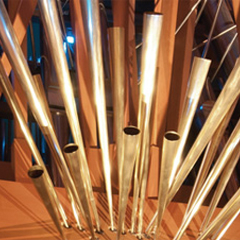