USC Thornton alumni Sarah Gibson (MM ’10, DMA ’15) and Thomas Kotcheff (MM ’12, DMA ‘19), who together form piano duo HOCKET, have launched a new commission series called #What2020SoundsLike. They have commissioned 50 composers to create new, short works between 15 and 45 seconds in length, which the duo will record and release on social media.

Gibson and Kotcheff describe the series as an outlet for artists to make sense of what has been a challenging year for many. “There has been so much to process this year on a day-to-day basis so we wanted to create a platform for composers to voice their responses,” the pair write on their website. At the end of the year, they plan to rerecord each piece for an album.

The first installment of the series will be released between June 15 and June 22, and will include three works from three composers, including two Thornton alumni. Gibson and Kotcheff will premiere a piece by alum Alexander Elliott Miller (DMA ’10) titled “BGA (Breonna, George and Ahmaud),” and a piece by alum Vicki Ray (DMA ’88) titled “SSB RI.”

Learn more about the series on the HOCKET website, and follow the duo on social media to enjoy the latest premieres. 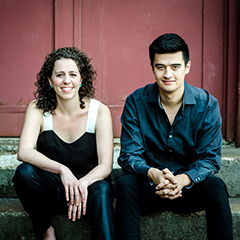