Studio Guitar alum John Storie (BM ‘06) performed and arranged music for the recently released album by Jeff Goldblum and the Mildred Snitzer Orchestra titled “I Shouldn’t Be Telling You This.” The album features guest artists Miley Cyrus, Fiona Apple, Inara George, Anna Calvi, Gina Saputo, Sharon Van Etten and Gregory Porter. The album is a follow-up to the 2018 album “Capitol Studios Sessions” and charted at #1 on the UK, France and US iTunes Jazz charts upon its release.

Storie toured with the group in the UK and France during the week of the album’s release, and the group will return this month to the U.S. for their weekly performance at the Rockwell in Los Feliz. On Nov. 4 the group performed on “Jimmy Kimmel Live!” and will perform on Dec. 12 on “The Late, Late Show with James Corden.” 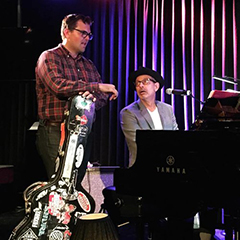