Violinist Kelly Hall-Thompkins launched the grand opening of the Music Kitchen, Los Angeles on Dec. 4 with a performance featuring USC Thornton faculty Karen Dreyfus and Glenn Dicterow. The concert at the Good Shepherd Center near Skid Row in downtown Los Angeles was the 73rd concert in the series, but the first in Los Angeles. An article in the examiner.com noted that Hall-Thompkins, a former student of Dicterow, launched the Music Kitchen to bring “top emerging and established professional musicians together in order to share the inspirational, therapeutic, and uplifting power of music with New York City’s disenfranchised homeless shelter population.” 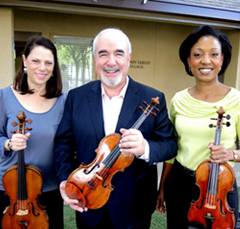