Midori Goto is a distinguished professor & Judge Widney professor of music at the USC Thornton School of Music.

Midori is a visionary artist, activist and educator who explores and builds connections between music and the human experience and breaks with traditional boundaries, which makes her one of the most outstanding violinists of our time.

Midori’s latest recording with the Festival Strings Lucerne of Beethoven’s violin concerto and two romances was released in October 2020 by Warner Classics. Her diverse discography by Sony Classical, Ondine and Onyx includes recordings of Bloch, Janáček and Shostakovich and a GRAMMY Award-winning recording of Hindemith’s Violin Concerto with Christoph Eschenbach conducting the NDR Symphony Orchestra, as well as Bach’s sonatas and partitas for solo violin filmed at Köthen Castle, which was also recorded for DVD (Accentus).

As someone deeply committed to furthering humanitarian and educational goals, she has founded several non-profit organizations. Midori & Friends provides music programs for New York City youth and communities, and MUSIC SHARING, a Japan-based foundation, brings both western classical and Japanese music traditions into young lives in Japan and throughout Asia by presenting programs in schools, institutions and hospitals. Throughout the pandemic in 2020 and 2021, she continued to create virtual programming for these organizations, which serve many different communities. She commissioned composer Derek Bermel to write a new piece, Spring Cadenzas, which was premiered (mostly virtually) by student orchestras in 2021 through Midori’s Orchestra Residencies Program (ORP) and will continue to be performed by ORP participants in future seasons. Midori also performed the piece with the National Repertory Orchestra in Breckenridge, Colorado. Through Partners in Performance (PiP), Midori co-presents chamber music concerts around the U.S., focusing on smaller communities that are outside the radius of major urban centers and have limited resources. During the pandemic, she recorded recitals that were shared with PiP audiences, and provided a series of live, virtual workshops to accompany the recorded performances.

In recognition of her work as an artist and humanitarian, she serves as a United Nations Messenger of Peace. In recognition of her lifetime of contributions to American culture, Midori is the recipient of the Kennedy Center Honors and was celebrated by Yo-Yo Ma, Bette Midler and John Lithgow, among others, during the May 2021 honors ceremonies in Washington, D.C.

During 2020 and 2021, she also continued to perform, when possible, and she appeared in recital (virtually and/or in-person) at the Philadelphia Chamber Music Society, at the 92nd Street Y, in a virtual concert also streamed by the Schubert Club and Lied Center for Performing Arts in Nebraska, and at the Amelia Island Chamber Music Festival. She performed live with the Houston and Detroit symphonies and in European engagements with the Royal Scottish National Orchestra, the OCM Symphony Orchestra in Spain, Borusan Istanbul Philharmonic Orchestra in Turkey and Orchestra del Teatro Massimo di Palermo in Italy.

She began her 2021-22 season with the Festival Strings Lucerne on July 1, performing the concert that had been scheduled for March 2020 but was cancelled due to the pandemic. She performed the world premiere of Detlev Glanert’s Violin Concerto No. 2 with the Royal Scottish National Orchestra in November 2021 and performed the piece with the NDR Elbphilharmonie Orchestra in Hamburg the following month.

Midori was born in Osaka in 1971 and began her violin studies with her mother, Setsu Goto, at an early age. In 1982, conductor Zubin Mehta invited the then 11-year-old Midori to perform with the New York Philharmonic in the orchestra’s annual New Year’s Eve concert, where the foundation was laid for her following career. Midori is the Dorothy Richard Starling chair in violin studies at the Curtis Institute of Music in Philadelphia and is a distinguished visiting artist at the Peabody Institute of the Johns Hopkins University. She is a distinguished professor and Judge Widney professor of music at the USC Thornton School of Music.

Midori plays the 1734 Guarnerius del Gesù ‘ex-Huberman’. She uses four bows – two by Dominique Peccatte, one by François Peccatte and one by Paul Siefried.

“It is an honor to teach. Learning begins when given information starts to be interpreted, executed, nurtured, and internalized, leading us to infinite opportunities.In our studio, the tenets of Honesty, Health, and Dignity guide us through the times of trial, self-doubt, self-questioning, and growth. The values of discipline and honesty find their way into perseverance in daily practice and in the diligent training of the ears, guiding us to approach any piece with humility and respect.

“Honesty comes only with sound health, physically and psychologically, and an honest mind cannot be separated from the most genuine acknowledgment of expression. It should be recognized that pure perfection is unobtainable. Therefore, the realization that one’s irrevocable faults and deficiencies must be faced guides us toward the first step of learning. We must each accept any situation as it actually is, with dignity. In that fine balance of acceptance of self and the mission to better oneself, compassion, humility, and discipline are nurtured.” – Midori Goto 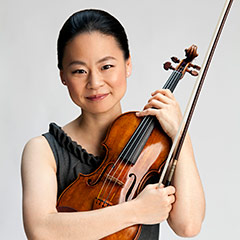