Shpachenko has emerged as a notable advocate for new music and received three GRAMMY nominations for her 2015 album, “Woman at the New Piano” (Reference Recordings). Her Bargemusic program, which was enthusiastically reviewed by New York Classical Review and ConcertoNet.com, featured the world premiere of Matheson’s “Alone, in Waters Shimmering and Dark.” 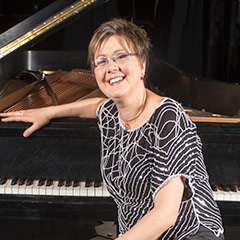