Raashi Kulkarni selected for the Universal Composers Initiative with NBCUniversal

Alum Raashi Kulkarni (GCRT ’16, MM ’18) is one of eight composers selected for the Universal Composers Initiative, a development program for composers from underrepresented backgrounds created by NBCUniversal and the Global Talent Development and Inclusion Group. Kulkarni, the first Indian-American composer chosen for this initiative, composed and orchestrated the DC Universe’s first Bollywood-inspired musical for a 2019 episode of DC’s Legends of Tomorrow, and she has composed music for episodes of Supergirl and The Flash. She has also released two albums that have debuted at the top of iTunes’s world music charts. In 2018, Thornton Screen Scoring alum Jermaine Stegall (GCRT ’04) was named to the Universal Composers Initiative’s inaugural class. 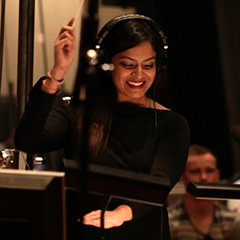