Trumpeter Ambrose Akinmusire (MM ’07, jazz studies), former USC Thornton faculty member and an alumnus, received praise for his recent performance at Chicago’s Constellation club. Akinmusire headlined alongside a quartet of musicians who, according to reviewer Howard Reich of the Chicago Tribune, “drew the largest crowd” seen at the venue in recent years. The Tribune praised Akinmusire’s music as “gauzy, elusive” and “exquisite,” noting that “the sheer beauty of Akinmusire’s tone was worth marveling at.”

Reich continued: “Akinmusire sabotaged jazz convention, avoiding well-worn musical structures, predictable dialogue among players and familiar improvisational syntax. Instead, Akinmusire and colleagues crafted a music that changed direction and context from one phrase to the next, like a conversation that darts from one subject to another without warning.”

Akinmusire continues his tour to New York City, where he will headline five nights at the Village Vanguard, February 23-28. 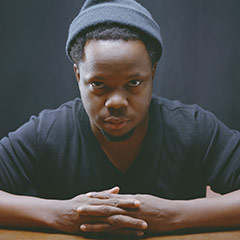