A recent article published by the Recording Academy profiles the rise of RAINNE, the dark-pop duo of Popular Music alums Annie Dingwall (BM ’13) and Justin Klunk (BM ’13), who recently opened the “We Can Survive” benefit concert at the Hollywood Bowl. The duo won the opening slot over 14,000 artists who entered the Opening Act contest for their shot at kicking off a show with some of the biggest names in pop music.

Dingwall and Klunk first met at the GRAMMY Museum’s GRAMMY Camp music industry program for high school students, before performing together again as students at USC Thornton. After pursuing solo projects, and occasionally performing shows together, they decided to form RAINNE. “I think over the years we both felt the most comfortable and creative when performing together, and decided that we wanted to do that more than any of the other things we had going on,” Dingwall says.

In the wake of their successful Hollywood Bowl performance and new singles like “Psycho Killer” and “Sin,” the two plan to release more music and continue touring in 2020. 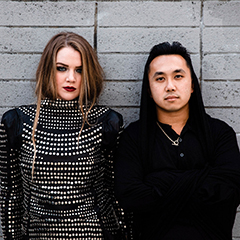