Tony Award-winning Jazz Studies alum Renée Elise Goldsberry (MM ’97) was interviewed in the LA Times about her role as Angelica Schuyler in the hit musical Hamilton after the film version of the musical was recently released on Disney+.

Goldsberry, who was also nominated for a GRAMMY in addition to her Tony win, talks about her connection with her character and the work that went into her showstopping performance of the song “Satisfied.” “This is an extremely well-written song,” Goldsberry says. “Every word is crafted to analytically take this woman on an emotional, life-altering decision for these three lives.”

Read her full interview in the LA Times. 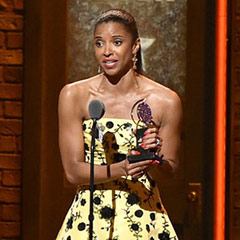