Composer and USC Thornton Composition program alum Rohan Chander (MM ‘22) won the Gaudeamus Award, a prestigious, international award for young composers. The announcement was made at the Gaudeamus Festival in Utrecht, The Netherlands on Sept. 11.

A composer and performer who performs as BAKUDI SCREAM, Chander was one of the five finalists selected from over 200 submissions from around the world. In announcing the award, the jury — which included Thornton Composition program associate professor Ted Hearne, who won the award in 2009 – wrote: “Rohan Chander is an electronic artist and world-builder who demonstrates the ability to synthesize various and disparate elements into a clear, considered and identity-driven work.” 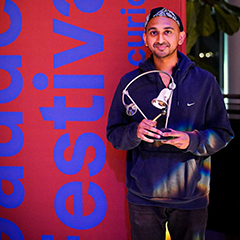