Scott Tennant, a member of the USC Thornton Classical Guitar faculty, was profiled in the November/December issue of Guitar Aficionado magazine for his project to record an album of compositions by virtuoso guitarist, Andrés Segovia. Tennant has collaborated with fellow Segovia disciple Michael Lorimer to compile the master list of Segovia’s known compositions and will use the maestro’s principal instrument, a 1969 José Ramírez 1A, for the recording.

“For a long time, my perception of Segovia the composer was limited to ‘Estudio Sin Luz,’” Tennant said of Segovia’s best-known composition. “But the more pieces I heard, the more my admiration increased. He was very skilled.”

Tennant has been an admirer of Segovia since he was a child and performed for the maestro while a student at Thornton, during his USC masterclasses in 1981 and 1986. 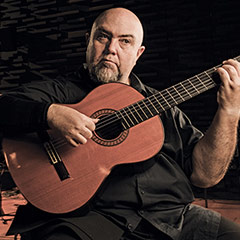