This month, the USC Thornton School of Music topped the list of the 20 best music schools for composing for film and TV by The Hollywood Reporter. The rankings noted Thornton’s commitment to inclusivity — women comprise 50% of students currently enrolled in the screen scoring program, making it one of the most gender-diverse programs in the country. Thornton is also in its second year of offering the USC Screen Scoring Diversity Scholarship, which provides tuition, housing and meals, as well as additional ancillary services, for up to two Black students each year, in efforts to increase opportunities for those of backgrounds and identities underrepresented in the film and TV industries. 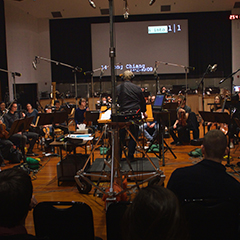