The premiere USC a cappella group, SoCal VoCals, recently won first place at the 2015 International Championship of Collegiate A Cappella, or the I.C.C.A., in New York City. This was the fourth time that the group has taken the title, following wins in 2008, 2010 and 2012.

The SoCal VoCals’ 2015 I.C.C.A. triumph was documented in an article by the New Yorker magazine, which called the “pitch perfect” ensemble “an established powerhouse, the team to beat.” The article noted that immediately following the championship show, “the SoCal VoCals were out on Broadway singing Fleetwood Mac’s ‘Tusk,’ a U.S.C. standard.”

Following their win, the SoCal VoCals were featured in a video interview with Annenberg TV News. 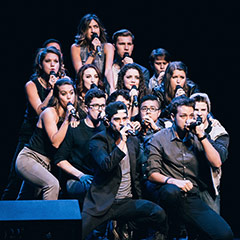