GRAMMY Award-winning composer Stephen Hartke is widely recognized as one of the leading voices of his generation whose work has been hailed for both its singularity of voice and the inclusive breadth of its inspiration. Born in Orange, New Jersey, in 1952, Hartke grew up in Manhattan, where he began his musical career as a professional boy chorister, performing with such organizations as the New York Pro Musica, the New York Philharmonic, the American Symphony Orchestra and the Metropolitan Opera. Following studies at Yale, the University of Pennsylvania and the University of California at Santa Barbara, interrupted by stints as advertising manager for several major music publishers, Hartke taught in Brazil as Fulbright professor at the Universidade de São Paulo, before joining the USC Thornton School of Music faculty in 1987.

Hartke’s output is extremely varied, from the medieval-inspired piano quartet The King of the Sun and Wulfstan at the Millennium, an abstract liturgy for ten instruments, to the blues-inflected violin duo Oh Them Rats Is Mean in My Kitchen and the surreal sextet Meanwhile: Incidental Music to Imaginary Puppet Plays, composed for eighth blackbird, to the Biblical satire Sons of Noah for soprano, four flutes, four guitars and four bassoons to his recent cycle of motets for chorus, oboe and strings, Precepts. He has composed concerti for renowned clarinetist Richard Stoltzman and violinist Michele Makarski, and his collaboration with the internationally-celebrated Hilliard Ensemble has resulted in three substantial works, including his Symphony No. 3, commissioned by Lorin Maazel and the New York Philharmonic.

Hartke lives in Glendale, California, with his wife, Lisa Stidham, and son, Sandy, and is a distinguished professor emeritus of composition at the USC Thornton School of Music. 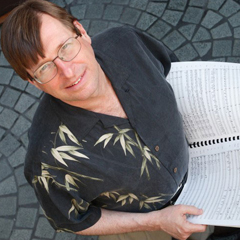