Strings magazine recently profiled USC Thornton alumna Cynthia Phelps, principal violist of the New York Philharmonic, on the occasion of the orchestra’s November premiere of a concerto written for her by Composition doctoral candidate Julia Adolphe (MM ’12, composition). The concerto, Unearth, Release, which was co-commissioned by the Philharmonic and the League of American Orchestras and has been widely covered in The New Yorker, the Financial Times, and the New York Times, celebrates Phelps’ 25 years with the orchestra.

“I was so lucky. She’s wonderful and young,” Phelps said of her working relationship with Adolphe. “I wanted something other violists would like to play: lyrical, virtuosic, shimmery, with many different colors. I wanted it to be all over the viola, and important like the Bartok and Walton concertos.”

Unearth, Release was performed by the New York Philharmonic under conductor Jaap van Zweden, who will take on the role of music director for the orchestra during the 2018-19 season. Adolphe will next premiere a new commission with Jeffrey Kahane and Los Angeles Chamber Orchestra on March 18, as part of the ensemble’s Sound Investment series. 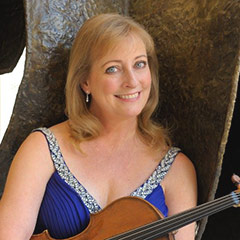