Evan Pensis (BM ’16, piano), a fourth-year student in the USC Thornton Keyboard Studies program, has garnered press attention for his performances for prisoners at the Arizona State Prison in Florence, Arizona. The Florence Reminder & Blade Tribune profiled Pensis’ recent recital before an audience of 140 prisoners and guests, which included works by Stravinsky, Prokofiev and Saint-Saens.

“I feel the incarcerated population doesn’t have access to a lot of art that it would definitely benefit from,” Pensis noted. “A lot of the things I love about music I want to be able to share with people, and I don’t want to just share it with those who can afford a concert ticket at Symphony Hall.”

Breaking in between pieces, Pensis spoke to his receptive audience about the program’s musicality, historical roots and emotional depths. He hoped that his Florence, Arizona performances would open the door to other such concerts. “These two concerts I do today will be a pilot for, ideally, a prison concert tour I’ll be able to do around Arizona over the summer to help bring music to more people. And I’m thrilled that it’s going to be somewhere where they’re not usually getting these sorts of performances. I’m glad to help contribute to the revolution.” 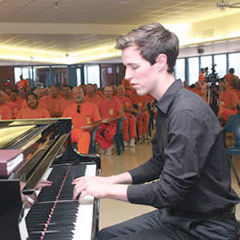