Tarisio Fine Instruments & Bows, one of the Major Benefactors of the Piatigorsky International Cello Festival, has published a digital exhibition of the cellos that will be featured in coming days. The interactive website features photos, interviews, and articles in a perfect accompaniment to the Festival’s incredibly diverse offerings.

Tarisio’s founder and director Jason Price traces the development of the cello from the first known example by Andrea Amati in the mid-16th century, through 150 years of modifications in Cremona, Brescia, Venice, Rome and Bologna. On May 18, the exhibition will also feature interviews with Ralph Kirshbaum, artistic director of the Festival, on his Montagnana, Ron Leonard on the only existing Pietro Guarneri of Mantua cello, and David Geringas and Zuill Bailey on their Guadagnini and Goffriller cellos. 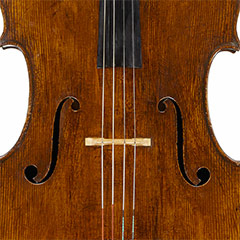