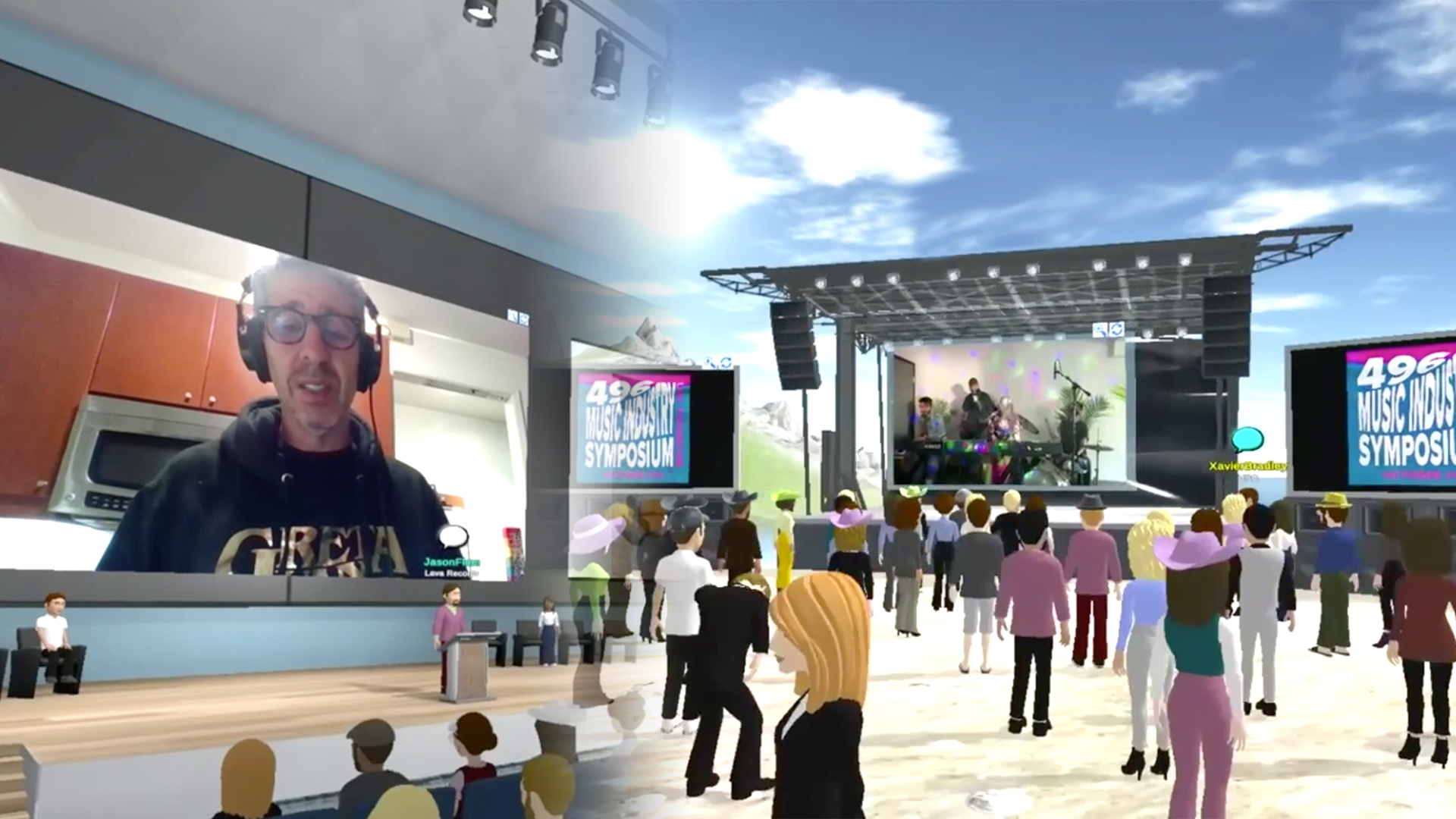 Jason Flom, founder and CEO of Lava Records, speaks to Music Industry students as part of a virtual networking symposium.

On Oct. 11, Thornton’s Music Industry Symposium brought together 131 students and professionals — through their avatars. With a new immersive virtual event platform called Degy World, 13 students in Thornton’s MUIN 496: Music Media Solutions class, with Associate Professor of Practice Kevin Lyman of Warped Tour fame, produced a career networking event that broke the Zoom mold just when everyone was getting fatigued with digital interaction. 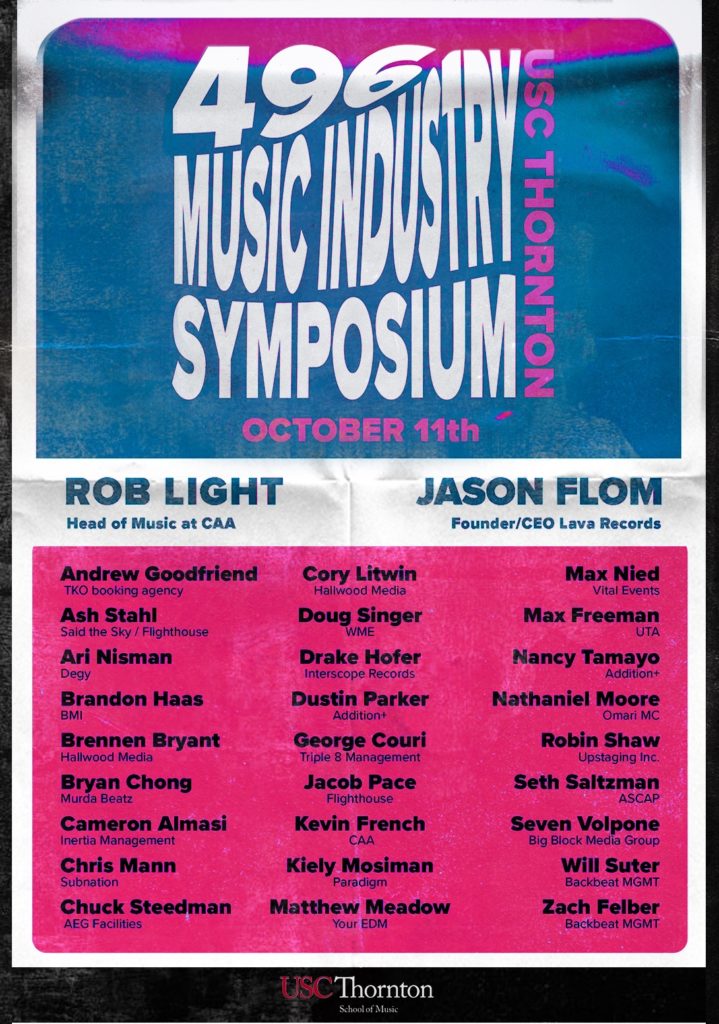 Along with keynote speakers and break out rooms with live video of 30 leading industry professionals, students enjoyed live-streamed comedy by J.T. Tomlinson ’21, a live-streamed concert by Karli Webster ’21 and her band (on a virtual beach) and finale fireworks.

“We’re in an era right now where keeping people engaged is our biggest job,” Lyman said.

But the symposium was more than just a solution to Zoom fatigue. It was meant to address a major concern of Thornton students this academic year: job security due to COVID-19’s disruption of the entertainment industry.

“Our industry is struggling; no one is hiring,” said Paris Watson ’21, one of the MUIN 496 students. “We know the pain of not being able to intern. We asked, ‘What’s the next best thing?’ We made the symposium more about building connections, about students and professionals getting to know each other. We’d be shocked if when companies do come back to hiring, some of these students weren’t the first people they contact.”

Current students, 2020 graduates and graduate students from the Music Industry program were invited. Student and speaker response was so enthusiastic that the class is using Degy World for their next networking event on Nov. 8, which will be open to all Thornton students across the school.

Ten days before the Oct. 11 event, the students were inspired to make a huge pivot from a basic video platform to Degy World. Lyman brought to campus a colleague of 25 years, Ari Nisman, president and CEO of Degy Entertainment, to talk about his new software.

“I saw the kids’ eyes light up,” Lyman said. “I asked Ari if he was offering this up for us to use for this event and he said ‘sure,’ and then, all of a sudden, it was on!”

Even with less than two weeks to launch, Lyman knew Thornton students were up to the challenge. He watched his MUIN 496 students make a similar pivot last semester, when they were planning a live citywide 320 Festival and had to pivot online on short notice because of the pandemic.

“The students are fearless, and I try to encourage that,” Lyman said. “I said, ‘Hey no one’s done this, so we can’t be measured against anyone but ourselves.’”

A Day in Degy World

The Sunday afternoon of Oct. 11, student avatars filled an auditorium — it wasn’t Bovard, but it felt close enough — to hear Jason Flom, founder and CEO of Lava Records, talk about persistence through adversity and pivoting to social justice and Rob Light, head of the music department at Creative Artists Agency, speak about presenting yourself in the job market and attributes to take with you. Their avatars took the podium as they were shown live on the large screen behind them. 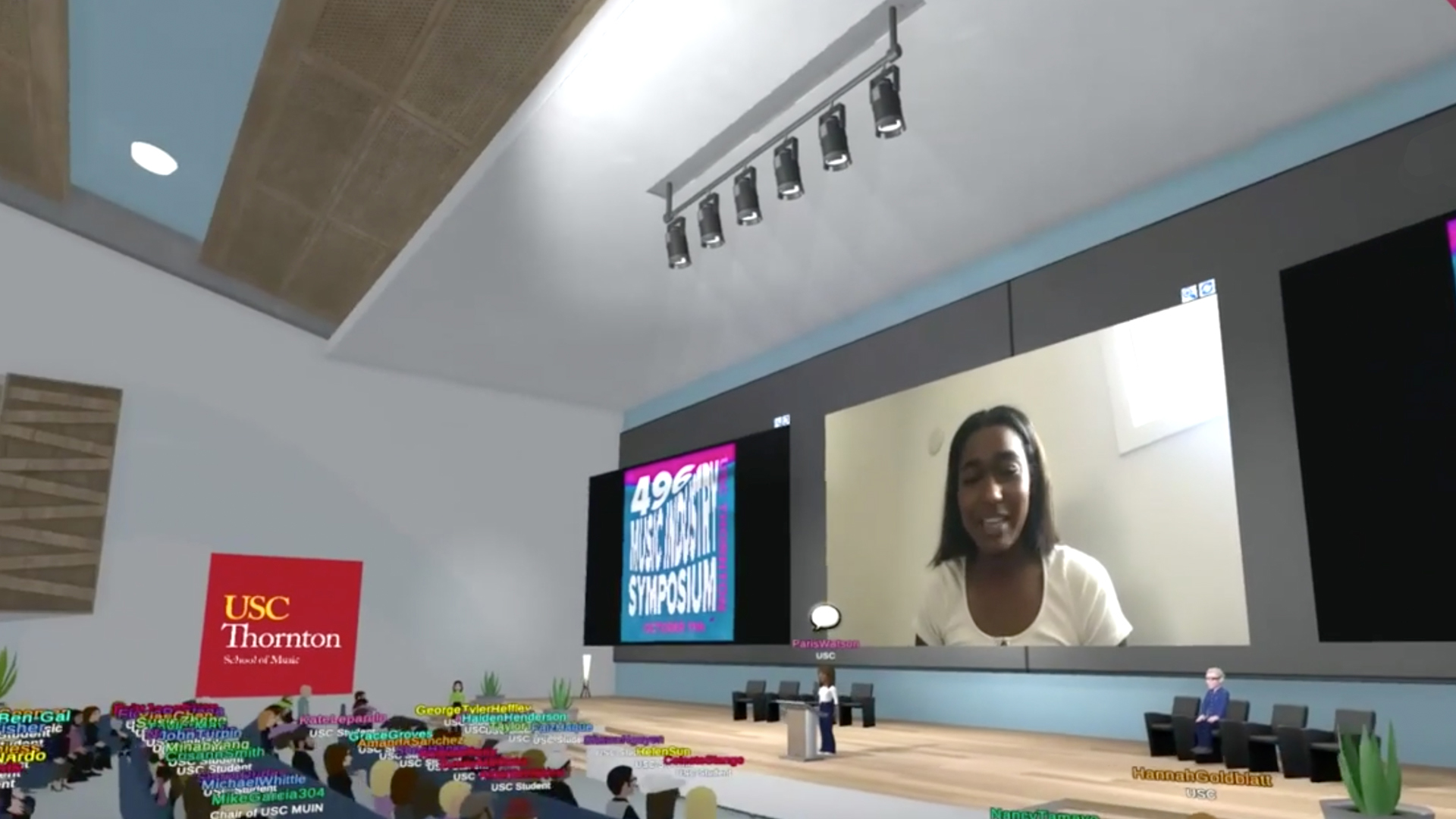 Music Industry student Paris Watson speaks to a virtual audience of attendees via live video, and her personal avatar in Degy World.

Breakout rooms were intentionally small, “because our class wanted to make sure that every student that came to this event got a true, genuine interaction,” Watson said. Resumes were collected, and speakers asked for students’ emails to stay in touch. Watson knows at least one student who may have an internship as a result of the event. “It was networking on steroids,” she said.

“That’s the whole thing right now: Everyone just needs to keep talking,” Lyman said. “This event was great for me, for the students and for the professionals because we are working in an industry that is somewhat paralyzed right now.” 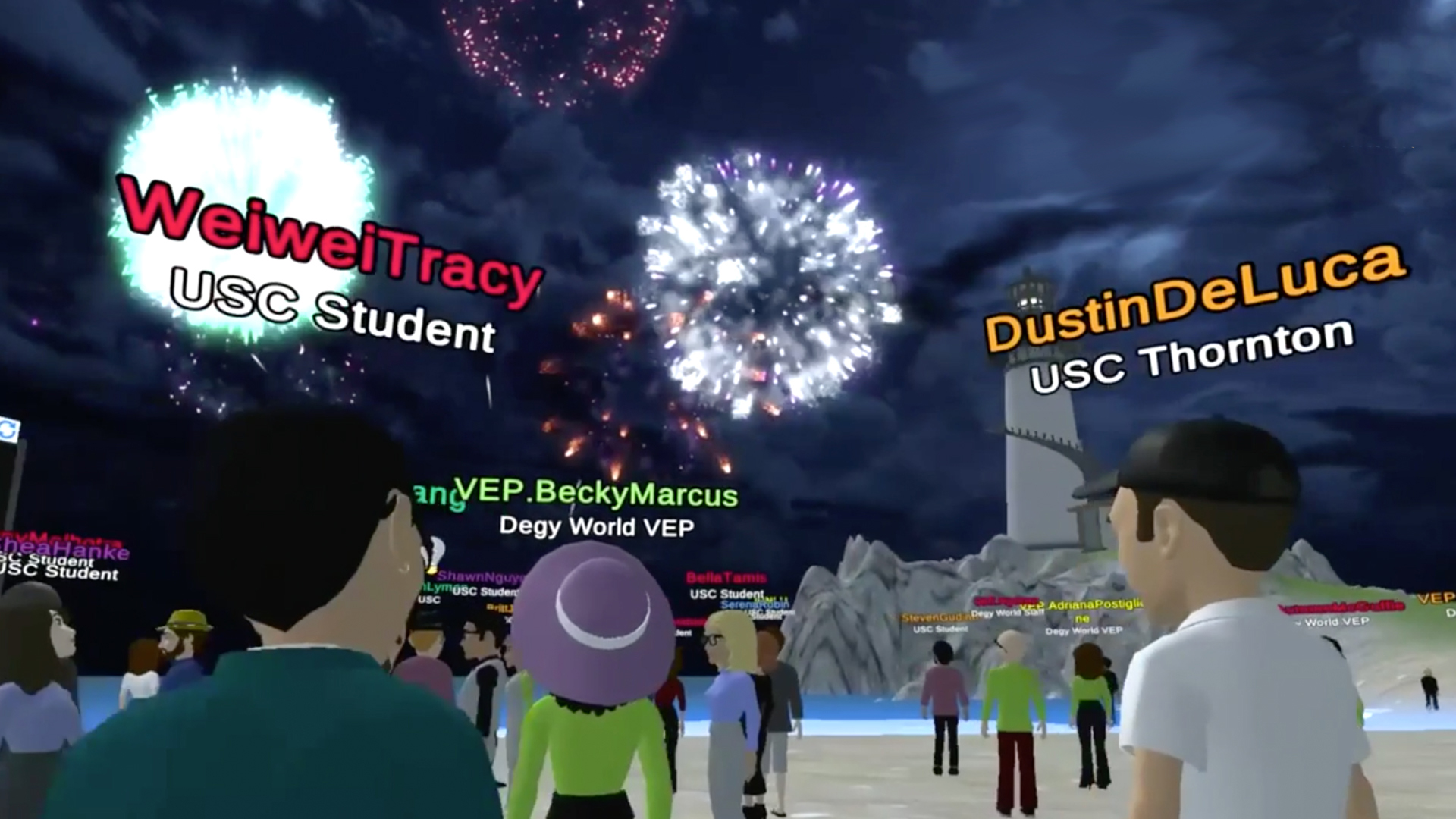 Symposium attendees take in a virtual fireworks display to close out the packed lineup.

The students recruited speakers from USC alumni and companies where they had contacts from previous work or internships. “To get 30 speakers to talk on a Sunday I think is a testament to the relationships we have built already at Thornton,” Watson said.

“The feedback I got said the students handled themselves professionally,” Lyman said. “And the technology was an equalizer. The students maybe knew how to use the technology better than the industry professionals. They came from playing The Sims all their lives and growing up on it. They were almost speaking as equals; there was no intimidation factor.”

Building on Their Success

Fourteen of the speakers from the October symposium contacted Lyman afterward and expressed interest in participating in the Nov. 8 event.

With 24 days to work on it, instead of 10, Lyman said the students are so far ahead of where they were. “It’s great to see the growth,” he said. “The learning curve is very fast, same as it was with the 320 Festival. Plus, we’ve got over 100 ambassadors, so the marketing should be very easy for this one.”

The Nov. 8 schoolwide symposium will feature 40 to 50 speakers from companies including Spotify, twitch, Warner Chappell Music, Interscope, BMI and UTZA, as well as a keynote address from Anna Bulbrock, musician and founder of Girlschool. Brooke Finegold ’20 has signed on to perform.

“We pushed ourselves to get even more speakers,” Watson said.

“That’s what I like about the students, that they’re not just going to settle for status quo,” Lyman said. “They want to push themselves and go to that next level.”

Xavier Bradley ’21 said the experience producing a real-world event was invaluable. “As a transfer student, I was used to college classes where the professor lectures for the whole class. This was far, far from that. Kevin lets the students discuss everything and problem solve. He only interjects when we need guidance or we get off task,” he said. “I also appreciate the good network I’ve made with my peers through this class.”

Bradley wants to pursue live music production, but he didn’t know that when he first got to Thornton. “After I got here, I realized there were so many possibilities. Fortunately, I ran into Kevin Lyman. He became my mentor in the world of live music.” When the pandemic hit and live music came to an abrupt halt, Bradley sought Lyman’s advice about how to redirect. His experiences in MUIN 496 helped to broaden his horizons. 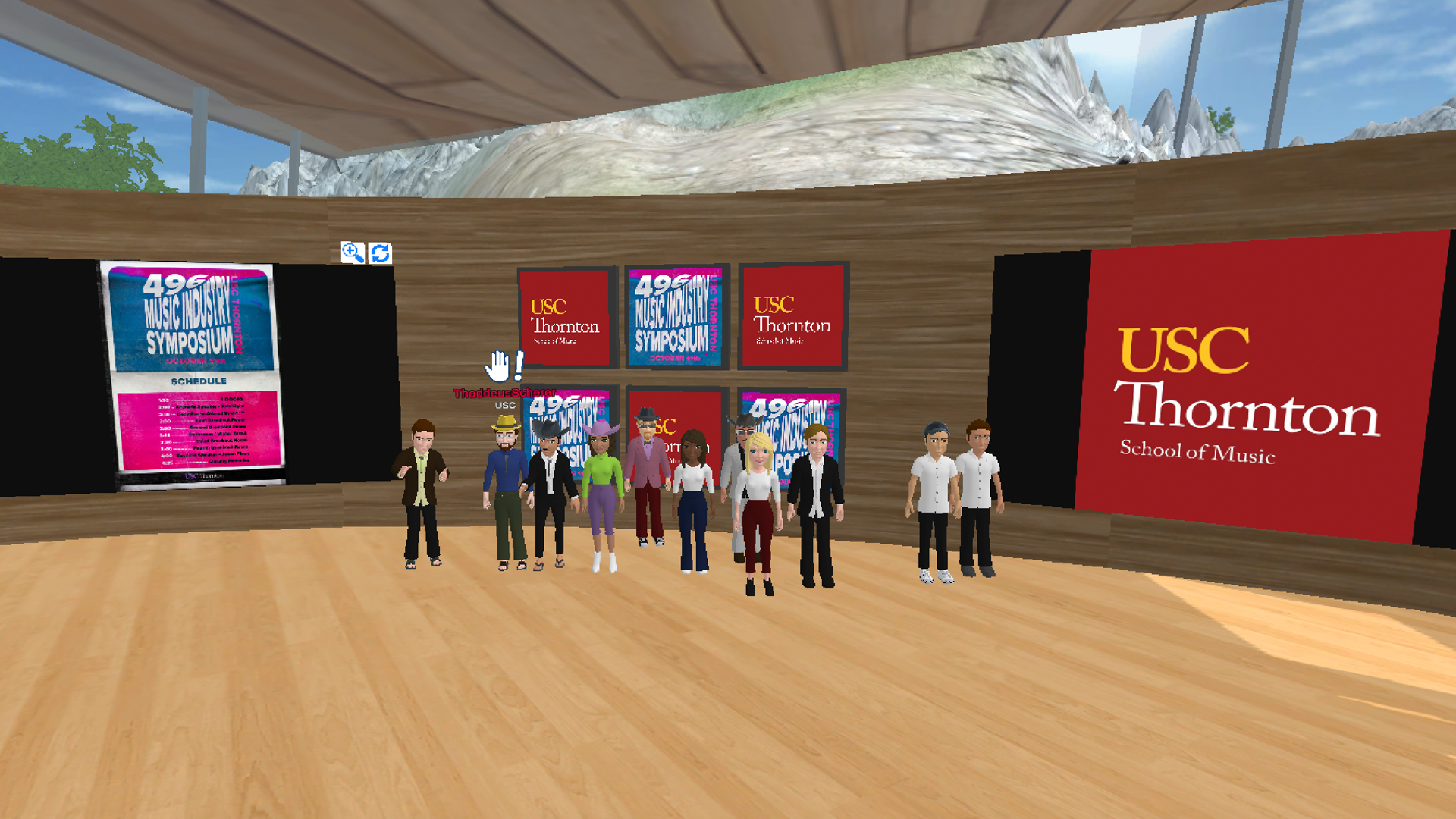 Attendees were able to interact and network through their Degy World avatars.

“Degy World represented this new lane of digital live entertainment. It’s obviously a lot different from live entertainment, but I learned a lot because there are a lot of similarities — booking, RSVPs, marketing. It takes a village to make an event like this happen,” Bradley said. “And all the students were excited because they thought it was like The Sims grown up. It was so much fun!”

Watson, who also plans a career in live music production, helped handle everything from coordinating with IT to capturing live video of the band on the day of the event. “It was super cool,” she said. “You had to anticipate problems. And you had to be super quick on your feet.”

Lyman’s class also changed her perspective on the future. Working with a new platform and making contacts when live events are not happening helped her to see other opportunities.

“It gives us a little bit of hope that when we graduate, if we’re still where we are today and events aren’t happening, there is something that we can do,” Watson said. “Our skills are still very transferable, and it’s nice to test them out here on a school event.”

The Music Industry Career Networking Symposium will take place on Sunday, Nov. 8 at 2:00 pm. This networking event, open to all current USC Thornton students, will allow students to connect with industry professionals in a time when opportunities are limited. RSVP for the event here.